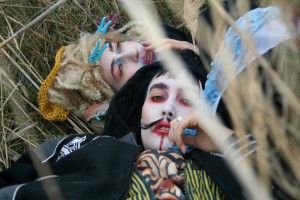 The sisters Grimm of freak-folk, CocoRosie promise a habitually theatrical performance of moreish oddity at The Dome this month.
Bianca and Sierra Casady, aka Coco and Rosie, come with a background as twistedly folkloric as their music. Daughters of a Syrian/Native American mother, the girls (born in Hawaii and Iowa) were eventually estranged from their father, and at one point even each other. Reunited in Paris, they began to produce as a duo the early outpourings of weird, hybrid music that would become their trademark. Four albums followed – including two sleeves separately labelled as the ‘worst covers of all time’. Genres as disparate as opera, folk, reggae and hip hop melded into a superlatively kooky mush, held together by the only consistent factor: Coco and Rosie’s distinct(ly weird) voices. Best differentiated on recent single “Gravediggress”, which imagines a conversation between an abandoned girl and a banished old lady, Sierra croaks and whispers ethereally before Bianca cuts through with her incredibly grotesque (though often incredibly affecting), cartoonish squeak.
This year sees a fifth full-length, with some of their most moving – as well as wacky – material, and collaboration from long-time friend of the pair Antony “and the Johnsons” Hegarty. CocoRosie provide a doubly intriguing, bewildering proposition – bewildering on the first count purely for the implausibility of their sound (especially Bianca’s twisted tones) and the image that goes with it, but on the second count for the fact of their continually shifting music, that resonates with new and bubbling noises each time. But they always sound very much like CocoRosie – different, from one song to the next, but also from just about everything else around.
Live, they’re known to incorporate this unpredictable oddity into their costume and behaviour, which has reputedly ranged from Sierra wearing tracksuits and playing MC, through dressing as a “burlesque scientist” to the duo playing pat-a-cake alongside their singles. The Dome offers up an exciting space for their theatrics, and it’s anyone’s guess how they’ll fill its period interior. One thing’s for sure – it’s gonna be a spooky, kooky mess the likes of which you’ve never seen before.
8pm, Fri Sep 27. £18 adv.
Head to brightondome.org for more info and to buy tickets, also available from Resident Records.
Words by Callum McLean