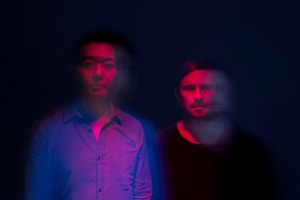 A two-for-one special, playing off Fuck Buttons’ transcendent fuzz and The Haxan Cloak’s satanic throb: electronic extremism at its finest.
Fuck Buttons have for some years had a sizeable cult following, until they reached critical mass this year with their third LP (Best New Music on Pitchfork), a headline Glastonbury spot and numerous features in the Olympics, thanks to Danny Boyle’s inclusion of ‘Surf Solar’ in his opening ceremony. While it would normally seem absurd to match a censorably named drone band to the largest sporting event in the world, Fuck Buttons proved with this year’s Slow Focus that their sound, as well as being majestic and tirelessly epic, can also be glorious, even victorious. Their earlier LPs stretched fuzzy samples out into screeching canvasses of sound, doing much the same job as many of their drone and noise contemporaries, only without guitars. The duo’s mastery of vintage equipment and manipulation of musical toys has since developed into a shimmering grandeur that betrays its lo-fi roots – they do ear-smothering walls of sound as well as slowly building minimalism, and each aspect of their sound fits into what is now a greater Fuck Buttons masterpiece. They’ll beat you into submission with a relentless euphoria that will make you want to pick yourself up again.
The Haxan Cloak, while also dealing in ominous and monolithic sound, can hardly be argued to be in any way euphoric. Rather, his morbid tapestries of shrill ambience, subterranean bass and nightmarish echoes evoke a moreish kind of horror. Much of this can be attributed to his signing to Tri Angle Records, where the bulk of artists combine sensually warped R&B and hip hop with a limitation on the emotional spectrum between ‘terrifying’ and ‘eerie’. Like labelmates Holy Other, Balam Acab and the helpfully titled oOoOO, The Haxan Cloak is interested in the deepest recesses of the sonic imagination, and to get to the most powerful stimuli of the brain, he resorts to musical territory that though relentlessly bleak, is more resonantly evocative, like a hypnotic scene from a horror classic, only his music maintains the effect for a damn sight longer. He showed this most masterfully on this year’s full-length Excavation, which essentially soundtracked the imagined path from death through the underworld and beyond. Like that album, The Haxan Cloak’s live shows are known to evoke something between ecstasy and panic, his all-encompassing doom the dark master to your ears, whether you like it or not.
Overall, the twin bill features two of the most potent acts around, and will stun at turns with gluttonous darkness and blinding light.
£14 adv + bf, 14+, 7.30-11pm.
Head to concorde2.co.uk for more info and to buy tickets, also available from Resident Records.
Words by Callum McLean