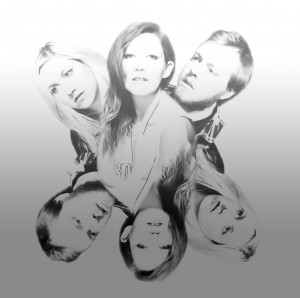 Canadian shoegazers No Joy hit the Green Door Store this November with latest album ‘Wait to Pleasure’ released April 2013 on Mexican Summer, and the follow up to 2012 EP ‘Negaverse.’
The (nearly) all-female line-up started out in 2009 as founding members Jasamine White-Gluz and Laura Lloyd who got together through email collaboration between Montreal and Los Angeles.  They were later joined by  vocalist Bethany Cosentino and drummer Garland Hastings and other members join them for their current tour.
Their debut ‘Ghost Blonde’, released November 2010 was picked up by popular and alternative press, meeting the approval of sites such as The Line of Best Fit and Pitchfork and the now defunct Stool Pigeon. The band embarks on a full US and European tour this year, and they’ll hit Brighton this winter as the latest buzz band on the scene right now.
Think rocked up psychedelia, crushed up guitars and smudged in vocals with haunting melodic hooks and watery beats. Ethereal and penetrating, it’s alt-rock infused, effects heavy nu-gaze. Expect a hypnotic live performance.
Doors at 7pm, £8 advance. Under 18s must be accompanied by an adult. R.O.A.R.
Tickets and more info at seetickets.com
Find the band at nojoymusic.com
thegreendoorstore.co.uk
words by Sarah Rayner