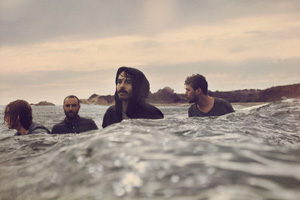 Orange County indie-folksters Local Natives ready their swelling harmonies and crescendoing choruses for Brighton Seafront next Tuesday.
Since their highly acclaimed debut Gorilla Manor in 2009, the fresh-faced, baby-voiced Natives have won praise for the sheer, joyful togetherness of their music. Collaborative from the second pen hits paper and pick hits string all the way through to performance (the debut was named after the house they shared during its recording), the Californian four-piece exude harmonious energy – the resultant formula a heady alchemy of afropop guitars, ensemble percussion and three-part harmonies, landing them comparisons to 2009 contemporaries Vampire Weekend and Fleet Foxes.
Their second album released earlier this year saw production duties from The National’s Aaron Dessner and won four-star reviews across The Guardian and Pitchfork for its continuing emotional exuberance and firm handle on stadium-filling melody. Lead single from the album ‘Breakers’ piled even more emotive force onto its swelling chorus than Gorilla Manor counterpart ‘Sun Hands’, and tracks like ‘Heavy Feet’ brought the house down recently at Glastonbury’s John Peel stage, proving that Local Natives are naturals at translating their highly personal, intimate songwriting onto the grand stage.
This unbridled passion will undoubted only be concentrated in Concorde2’s narrow interior, where the raw lyrical content of ‘Airplanes’ – written about singer/guitarist Kelcey’s grandfather – will resonate as powerfully as the shimmering waves of bright guitars, soaring vocals and frothy percussion that make up Local Natives’ unbeatable prowess as a perfect summer band.
£18 + BF, 14+, 19.30-23.00.
See www.concorde2.co.uk for more information and to buy tickets.
http://www.youtube.com/watch?v=4SceYlhOBdY