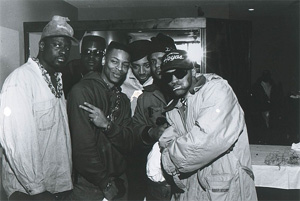 Catch a rare performance from the Golden Age of hip hop’s key players, fronted by supreme rap eccentric Kool Keith, celebrating twenty five years since their canonical debut.
Often lauded as comparably iconic to classic hip hop albums by Public Enemy and Eric B & Rakim, Ultramagnetic MCs’ 1988 album Critical Beatdown served as a template for break-driven rap music, producer Ced Gee’s pioneering use of sampling accompanied by his own and Kool Keith’s exemplary delivery. Both rappers’ elaborately rhythmic flows wove hip hop braggadocio from pseudoscience and stream of consciousness, influencing generations of underground hip hop artists, as well as offering up highly sample-able soundbites (“Pay close attention/I’m gonna take your brain to another dimension” from ‘Critical Beatdown’ famously sampled by The Prodigy in ‘Out of Space’). As Ced Gee’s innovative use of ‘chopped’ samples and heavy funk riffing ushered in a decade of classic production, Kool Keith’s prodigious solo career (in which he claimed to invent ‘horrorcore’) went on to spawn numerous bizarre personas, most famously the alien gynaecologist Dr. Octagon.
With Keith tipped to retire from music (2012’s ‘Goodbye Rap’ a telling sign), the show at Concorde2 might be the last time the reformed group perform with a full lineup. Judging by the evidence of twenty five years’ experience at the top of the game, these hip hop legends cannot fail to resurrect the spirit of ’88 with unbeatable and undying bombast. How often do you get to travel a quarter of a century back in time?
£14.50 + BF, 14+, 19:30-22:00
See www.concorde2.co.uk</a]] for more information and to buy tickets.