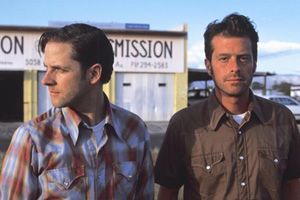 The Corn Exchange host a double bill of South Western US indie rock, from Calexico’s Tex-Mex Americana to The Dodos’ frantic indie folk.
Tucson, Arizona’s Calexico have been faithfully bridging the sonic (and recently, political) frontier between Latin America and the US for almost two decades now, earning consistent acclaim with every offering since 1998’s The Black Light. Masters of this fusion sound, their occasional forays into Mariachi and spaghetti Western are largely left on the wings – core members Joey Burns’ and John Convertino’s delicate strums, trailing voice and dusty percussion forming the most recognisable and effective bulk of Calexico’s sound, together with the odd set of horns. This winning blend and an evocative lyrical palate of fateful crossings, Latino mythology and a border town aesthetic have never relegated Calexico to Tejano novelty, on the back of their solid songwriting and live showmanship. 2012’s move to post-Katrina New Orleans, Algiers, being no exception to the brazen wealth of their back catalogue, there’s plenty of life in Calexico’s desert yet.
Contrastingly, San Fran’s The Dodos offer up a more highly strung brand of frenetic indie pop, with shredded folk undertones. The duo’s propensity for clean cut melody and cracked, electric rhythms are matched only by their instrumental eccentricity – drummer Kroeber notably playing without a bass drum, on rims and with a tambourine gaffer-taped to his foot. The product of this bolshy indie pep is, thankfully, a set of energetic but unpretentious tunes, and an infectious live atmosphere to be contended with.
Overall, this is a two-for-one package of indie brilliance that you’ll never catch again – this side of the Rio Grande.
£16 + BF, 20:00
See BrightonDome.org for more information.