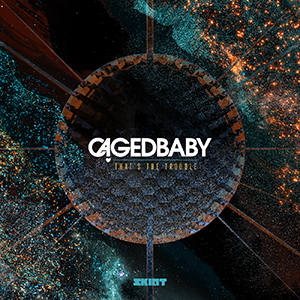 Brighton born Thomas Gandey, also known as Cagedbaby, is sure to be commandeering a dance floor near you soon with the upcoming release of second album “Now We Are Two”. With an impressive collection of deeply entrancing house tracks under his belt, the charismatic DJ, Live Artist, Vocalist and Producer is taunting us with the release of addictive new single “That’s the Trouble”.
Coming from a self-confessed synth and technology addict, the new single is triumphantly upbeat, complexly layered and rather Daft Punk-esque, whilst the spaced out and summery vibes ignite visions of sunbathing on faraway planets with pina coladas. However, his unmistakable deep sounds are evident in the new release, which work a treat alongside melodic synth hooks and uplifting vocals. After recently signing to Brighton’s own renowned Skint Records, it’s easy to expect big things in the future; every house music fanatic should give the homegrown talent a listen.
With various successes over the past two years, including releases dubbed as ‘essential tunes’ by Pete Tong of Radio 1, platinum selling remakes of Jeff Wayne’s iconic “War Of The Worlds” soundtrack as well as playing over 150 shows with Fatboy Slim, who personally sought him out, Cagedbaby still has no direction to go other than up.
9/10, out February 10, Shira Rossiter
Listen to the single here
Keep up to date with Thomas Gandey at cagedbaby.com
and Skint Records at skintentertainment.com