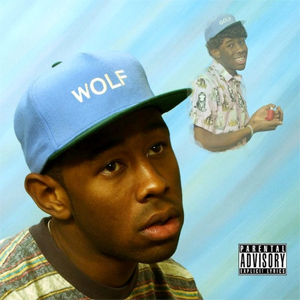 Elvis’ gyrating crotch didn’t cause the world to end, the Sex Pistols televised swearing failed to hasten society’s demise and, likewise, Tyler, The Creator’s media baiting bigotry appears destined to do little in terms of any ensuing apocalypse, a job that, for the time being at least, seems quite safe in the capable hands of a certain Mr. Jong Un.
But hasn’t it always been the prerogative of the latest l’enfant terrible to provoke the sensibilities of the establishment? To get the Bill Grundy’s amongst us grumbling with a ‘not in my day’ discontent? Well, if the erstwhile Mr Grundy had caught a load of the Odd Future frontman’s third studio album ‘Wolf’, it would certainly have made Johnny Rotten’s V-sign seem a little tamer.
Opening with lush chords that wouldn’t feel out of place on a Tamala Mowtown number, it’s not long before ‘Wolf’ is interrupted by Tyler’s characteristically nihilistic drawl, reminding the listener just where they are here. This isn’t a Delphonics track after all, this is Wolf Gang.
‘Fuck you, fuck them, fuck everybody else’ Tyler spits, or rather sneers, every vowel and consonant at his disposal laced with a theatrical disgust indicative of all the best anti-heroes. But there’s a self-deprecatory air to proceedings at play here, so while tunes such as ‘IFHY’ certainly carry a hint of malevolence, amidst the usual production heavy rumble and dubstep friendly beats, one gets the impression Tyler’s anger is directed at himself as much as anything else.
Beneath all the tabloid taunting lyricism then, in tracks such as ‘Jamba’ and ‘Colossus’ we find in Tyler a performer who isn’t afraid to subvert the modern stereotype of the hip hop artist and whilst maybe ‘Wolf’ isn’t quite his masterpiece, it’s nonetheless a worthy successor to previous releases, ‘Bastard’ and ‘Goblin’.
7/10, out now, Ed Kirby
For more info and downloads, visit oddfuture.com