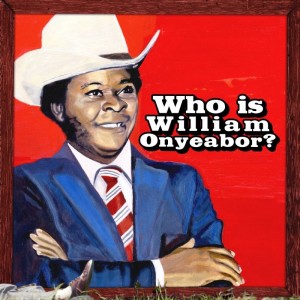 After decades of speculation about the mysterious Nigerian funk prophet (Soviet cinematographer? Flour mill owner? Local Politician?), Luaka Bop provide the first ever legitimate release of William Onyeabor’s increasingly sought after work from the late seventies to mid-eighties. The likes of Four Tet and Caribou have long sung his praises, and finally here Onyeabor gets to sing his own.
Though he has been a hushed legend in record collectors circles for some time, William Onyeabor exploded into the Western pop imagination over recent years after Four Tet’s prominent use of the Nigerian’s music in his 2010 Essential Mix. Friends and fellow electronica legends Caribou and James Holden’s similarly unbridled enthusiasm has also seen both rework Onyeabor’s analogue-heavy compositions, most notably in the former’s work as Daphni, his club smash “Ye Ye” bending around a tinkling loop from “When The Going Is Smooth And Good”. What struck these musicians particularly is not just Onyeabor’s charismatic delivery on all topics (global) political and more generally advisory (“You Russia…You China…You Cuba…You ever think this world is yours?” goes “Better Change Your Mind”) but his curiously affecting, tinny funk and innovative use of analogue synthesisers. “…Smooth And Good” continues to pepper Four Tet sets because – despite its thirteen minute length – the track bubbles with such evocative synth lines that it gets crowds going just as well as the latest techno cut, prefiguring modern dance music by some forty years, and a continent away from the West at that.
Luckily, “Who is William Onyeabor?” is brimming with equally evocative numbers. Its three longest tracks manage the same trick of riding a groove so deep that ten minutes pass by in what seems more like three. Opener “Body and Soul” manages this on perhaps the most straightforward funk on the album, its female backing vocals resonating Funkadelic, and Onyeabor’s trademark moog drifting through textural riffs that propel the track along at an irresistible pace. “Something You Will Never Forget” broaches similar territory a few shades downtempo for some classic Onyeabor existentialism – “Something you will never forget/ One day you’ll be lying down”. But perhaps more remarkably, “Good Name” reaches Hi-NRG heights that seem to call forth house music from some distant future with its four-to-the-floor hi-hats, Onyeabor’s vocal swimming around the beat like the best of Chicago samples.
But the whole time, the most constant presence – on top of his solid female backing singers – is Onyeabor’s analogue synth lines. Catnip for dusty synthophile types, it’s also a completely engaging tone that accentuates his idiosyncratic sound almost singlehandedly. From one moment an infectious embellishment across looping measures, the next a tinny backdrop or the driving melody – but the whole time an oddly signature element, sounding every bit Onyeabor whether set to mucky moog or rasping synth strings. “Let’s Fall In Love” for example twists along at a pace that nearly matches acid techno for its heady metronomy, only here acid’s trademark transistor bass has its role filled by diving saxophone licks and of course Onyeabor’s lightning rod synth parts – all on a bed of juddering keyboard that could be the automatic rhythmic drone of an arpeggiator, if it wasn’t for the clearly human hands stabbing at its monotone keys. It’s this audible joy to the playing, and the imaginary visual image of a young Onyeabor truly rocking out, that make the music so warm to the ear.
Because what the reissue plays on, without capitalising on, is the intriguing mystery surrounding this odd Nigerian character. Rumour served to fill in the immense gaps in public knowledge about the funk star. Apparently he’d studied cinematography in the Soviet Union, he owned a flour mill, had become heavily involved in local politics, and was also pushing a line of trademark analogue synthesisers from his large house in hometown Enegu. While almost none of these stories have been substantiated, Onyeabor’s disavowal of his musical life in favour of born again Christianity has been an unavoidable block to the surge of attempts to fill in the picture of his life. “I have a good thing…I mean what I say, and nobody can buy my name” sings Onyeabor on “Good Name”, his religious conversion imminent. And after many careful but insistent years, Luaka Bop have managed to translate some of Onyeabor’s legendary essence to Western audiences, but without buying his name. The mysteries remain; “Who is William Onyeabor?” isn’t really answered. That is unless you count eighty joyful minutes of incredibly innovative, unique music as that answer.
9/10, out now, Callum McLean.
Head to his tumblr for more info and to buy the album, and read more about Onyeabor’s mysterious story at The Guardian