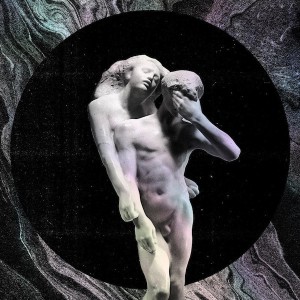 Not every band can boast a resume of three albums and sixteen instruments, whilst being dubbed “the best band on the planet” by Chris Martin. So when a band of this calibre brings out a brand new thirteen track album, featuring none other than David Bowie’s vocals, it’s kind of a big deal. Arcade Fire’s new album takes on quite a Bowie-esque feel throughout, with playful melodies and synthetic sounds. In between each track is where it becomes evident that James Murphy has produced the mammoth album, with distorted bleeps and bloops that suggest LCD Soundsystem coming in to play.
Notably, “You Already Know” is intro-ed and outro-ed with audio clips of Jonathan Ross. The band performed on “Friday Night with Jonathan Ross” 6 years ago now, when Win Butler decided to spontaneously smash a camera on air with his mandolin, having just played “Keep the Car Running”. (You can watch that performance here) The use of the talk show host’s voice on the album seems to be a indicator that Butler is parodying his own tantrum in order to emphasise Arcade Fire’s growth and maturity as a group, now that they’re older. Never one to ferment in a rock n’ roll stupor, the lead singer’s Mormon roots seem to have taken grasp of him in adulthood. However, “Normal Person” is a catchy and pure rock anthem.
No longer young and emotional, the whole thing sounds like a reformed, grown up and wise-to-the-world Arcade Fire, at their best. Oh, and they’re topping the album charts to boot.
8/10, Out now, Shira Rossiter