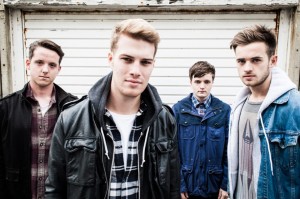 Since their formation in 2010, Glass City Vice have been making a name for themselves in their hometown of Brighton and around the UK, thanks not only to their hard work ethic, but also their steady flow of consistently impressive alt-rock releases.
The latest effort from this four-piece is simply titled “Waves”. It’s hard to find a dull moment on the band’s third EP thanks to the ‘single-worthy’ status of each of its three tracks. It’s an accessible breeze of catchy hooks and memorable lyrics arranged into classic pop structures, but don’t worry, there’s more to it than that. What really shines through on “Waves” is the band’s competence as songwriters, highlighting true attention to detail in regards to both their individual parts and the songs as a whole. The melancholy undertone of Josh Oliver’s vocal delivery is what gives their sound a unique quality, and also provides a much-needed layer of depth and bite throughout.
With each song clocking in at just under the three-minute mark, “Waves” is a short but sweet affair. It could definitely benefit from another track or two to further demonstrate the band’s versatility, but it does a mighty fine job of leaving you wanting more and will have you coming back time and again. “Waves” can only work wonders for Glass City Vice and will no doubt act as a huge stepping-stone for even bigger and better things in the very near future. Keep your eyes peeled, and good luck getting these songs out of your head.
Watch the video for “Have to Say” below and download “Waves” for FREE (what a bargain) from glasscityvice.bandcamp.com
8/10, out now, Sam Barnes
Glasscityvice.com
facebook.com/glasscityvice