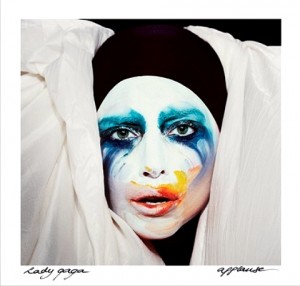 So Lady Gaga has once again thinned down, toned up and stripped off. Reaching 30 million views in just one week, her new single, “Applause” is the first from upcoming album, ‘Artpop’. The single was released early after hackers made snippets of the song viral. However, the full video is now all ours. Having apparently lost some 30lbs in a crash-diet, she’s not at all reluctant to flaunt her stuff, barely covering her lady humps with a bra shaped like a man’s hands and a pair of shells. In contrast to much of her back catalogue, the song itself, though catchy and a good dance-along club track, doesn’t really deliver any particular drama. Prepare to hear it on any and every night out nevertheless.
And thus, although the imagery of the artist’s head replacing that of a swans does leave a stain in one’s memory, the usual display of mildly bizarre costume changes, art nouveau feel and flashing lights begs one to ask, ‘Is Gaga settling into generic pop?’.
Um, no. Probably not.
6/10, out now, Shira Rossiter.