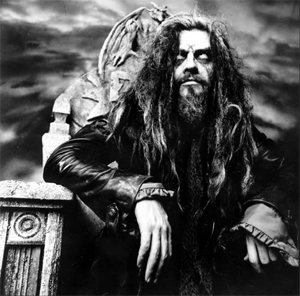 Why can’t Coldplay, just for once, release a song called ‘Teenage Nosferatu Pussy’?
Seriously, I promise if they did, I’d actually buy, (well OK, download), one of their turgid MOR leavings for once in my sorry life.
But no, the delicate art of creating pop monikers of such depth and profundity has to be left to the likes of Rob Zombie, though with the release of the delightfully named ‘Venomous Rat Regeneration Vendor’, from which the aforementioned ‘Teenage Nosferatu Pussy’ comes, it looks like such a responsibility is at least in safe hands.
As one might well expect from an album that contains such jaunty numbers as ‘White Trash Freaks’ and ‘Lucifer Rising’, Zombie’s fifth solo studio album is a somewhat heavy affair which upon first hearing, with it’s overwrought guitar riffs and power drum sequences, I was tempted to consign this to the box marked ‘Generic Transatlantic Metal’. But there’s something more to Rob Zombie than mindless frat boy rock, something that makes this worth another listen.
Maybe it’s the crackly French vocals sampled in ‘The Girl Who Loved The Monsters’, or perhaps the cover of Grand Funk Railroad’s ‘We’re An American Band’, but Zombie seems adept at subverting the stereotype of thoughtless shock rocker. Well, relatively.
In fact, Zombie appears to be something of a polymath. Aside from music, he has forged a particularly successful career in the film industry (his remake of 1970’s slasher classic ‘Halloween’ was, at $80m, the highest grossing of the franchise), whilst also working as screenwriter and producer for a number of cult movie classics, including ‘House of 1, 000 Corpses’ and ‘The Devil’s Rejects’. Sound fun, huh?
Well, actually, it is kind of fun, and so is Zombie, or at least, he seems it. As a big fan of the horror genre himself, you get the feeling this is all part of an homage, to the Dracula’s and Frankenstein’s of Zombie’s personal cinematic youth. So, even though he may be singing about filthy creatures, guns and coffins, you get the feeling it’s all done with the utmost enthusiasm. Which is more than can be said for Chris Martin and his dour chums.
6/10, out now, Ed Kirby
For more info and downloads, visit RobZombie.com
Follow him on Facebook at facebook/RobZombie