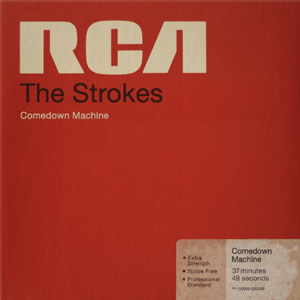 The Strokes will always be considered an important band. 2001’s ‘Is this it’ can at least in part be credited for pointing the mainstream musical compass of this millenniums first decade away from overproduction and back towards credible guitar bands that were quintessentially Rock and Roll. Wearing their influences quite literally on their leather and denim clad sleeves Julian Casablancas, Nick Valensi, Albert Hammond, Jr., Nikolai Fraiture and Fabrizio Moretti looked and sounded like they were from 1970’s New York. It was a powerful post-modern and post-punk reinterpretation of of their native city’s rich musical heritage that managed to be unquestionably relevant and strikingly original.
Come Down Machine comes more than a decade after this initial hype as a follow up to 2012’s “Angles”, an album that was met with a mixed critical reaction as the band were both praised and mauled for softening their rougher edges for pop sensibilities. Like Angles ‘…Machine’ is produced by Gus Oberg and the scrappy sound has been expanded further than ever before with varying degrees of success. Opening track Tap Out begins with a feedback laded squeal before dropping into a very neat 80’s tinged dream-pop gem as Casablancas’s high pitched and strained vocals and Albert Hammond Jrs. intricate yet subtle guitar work bounce from Verse to Chorus at a happy pace. Along with first official single ‘All the Time’ it is an album highlight. The title track 80’s Comedown Machine sees the bands furthest push down the road of experimentation in a gorgeous tremolo heavy mix of slow paced melody and vocal harmony as Casablancas gently pleads “So Please, Run Away”. In moments such as these the choice to move away from the two dimensional broken radio sound is credible, yet other than the dire Erasure flavoured One Way Trigger it is not so much production rather than adverage material that lets them down. There are songs that comfortably chug along with little impact like the classic rock tinged 50/50 or vaguely tropical ‘Slow Animals’. This is especially unfortunate as Casablancas often less than impressive vocals now seem so easily prone to become a raspy rambling if there are is not a distinct melody for them to compliment.
This band may not have a place within pop culture like it once did but despite a slight identity crisis this is an overall enjoyable album that often hits the mark; next time round we just need a little less synth and a little more Strokes.
7/10, Out Now, Benjamin Ward
For more information visit thestrokes.com or add them at facebook.com/thestrokes

Tags: Angles, Come Down Machine, Is This It, New York, pop, Post-Punk, The Strokes