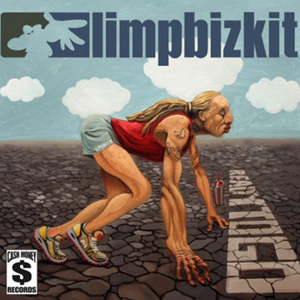 Ready To Go is the Nu-Metal 7 pieces first release off new album Stampede of the Disco Elephants, their second L.P since deciding to return from an indefinite hiatus with 2011’s ‘Gold Cobra’. Singer Fred Durst starts the party in typical Bizkit style with a defiant ‘Go Fuck Yourself!’ as we are met with what we have come to expect from a band who essentially named their breakthrough album (2000’s Chocolate Starfish and Hotdog Flavoured Water) ‘Anus and Urine’: It’s loud, bombastic and unbelievably stupid. Durst follows a formula that anyone who was a teenager in 2002 and obligated under MTV law to like this kind of music hoped had gone forever. He uses meaningless profanity to lace poorly thought out word play with obnoxious and embarrassing advise such as “Throw those fingers up and finger fuck the sky” before repeatedly asking the audience “Is that your bitch cos she tell me she ready to go”: Indeed it is, but i’m sorry Fred she’s just not that into you…
A song so dumb may be interpreted as a genius parody of what it is to be an utter arsehole but the fact is that it is without the faintest hint of irony. Still, its hard to criticise when all the musical and lyrical idiocy have been intentionally and painstakingly engineered to simply cause the biggest mosh pit. In this sense the music is genuinely powerful, as pounding drums and slick production return us to the giddy heights of Nu-Metals heyday when Rap and Rock combined seemed genuinely cutting edge. Even if guitarist Wes Borland’s often innovative guitar work is reduced to a never-ending solo it doesn’t mean that if you were drunk out of your mind that you wouldn’t enjoy this being the soundtrack to smashing up a car with a baseball bat.
Lil Wayne strikes his now long established rockstar pose for a verse, opening with the line “What the fuck is up! Fuck the world, bust a nut!”. His own steady fall from grace since 2008’s grammy winning ‘Tha Carter III’ culminated with the signing of these numbskull Nu-Metalers to his label ‘Cash-Money’ last year. Ready to Go is the first taste we have had of this era of Bizkit and it is as predictably sour and irrelevant as ever, even if it achieves what it sets out to do.
3/10 – Benjamin Ward.
Out Now for download from limpbizkit.com
For information on any upcoming shows visit the band’s site or facebook.com/limpbizkit