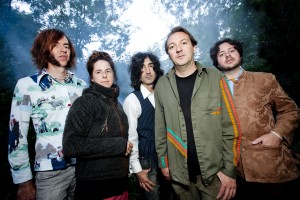 If you think Elf Power is something you get after playing 50 hours of Skyrim, then you obviously need to get out of the house more. (Sorry mum, I’ll be down for tea in a minute!) In fact, they’re the indie folk project of visionary Andrew Reiger who collaborates with various member of the now defunct Elephant 6 recording collective.
If you’re already an Elf Power fan, this new collection of tracks released on Orange Twin Records, will put you right at home. Title track Sunlight on the Moon is a standard tambourine pop ditty that will get stuck in your head like a Byrds B-side. As will opener Transparent Lines, with its robotic drum line and trippy lyrics. The first half of the album is charmingly up-beat and lo-fi, a nice, but acquired taste if you’re used to the over produced indie currently gracing NME. The album’s second half is a darker and slower affair. Tracks such as You’re Never Gonna Go To Heaven and A Slow Change drag a tad, and Andrew’s monotone voice becomes grating rather than unique on these.
It’s also interesting to hear some experimental instrumentation on this album. Elephant 6 bands are known for implementing singing saws, zithers, and tape loops. Elf Power are no exception to this idiosyncrasy as random noises, blips, and fuzz permeate the record. It all adds to the charm and surprise, which again, is missing from many chart releases.
It’s the kind of album you put on to impress your new girlfriend with your ‘Alt’ tastes, but it will soon get replaced by Daft Punk’s Get Lucky when you’re getting down on it…
7 tambourines out of 10. Out Now. JDF
For more info visit elfpower.com
orangetwin.com