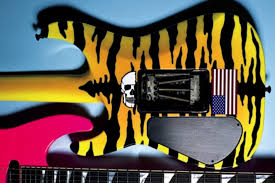 They say that Christmas is getting earlier and earlier every year. Well it’s October and the new Sleigh Bells album is out! Better run to the shops now and get it before they run out of copies! Only joking my panic-buying friends……just get it online stupid.
Who thought combining pop and metal could make such a perfect couple? (No, Nickelback and Avril Lavinge don’t count.) These sexy Brooklyn hipsters are not uninitiated. This, their third release, is much of the same chunky power chords, big beat drum machines and shouty grrrl vocals (Think Shampoo’s We’re in Trouble, but good…) as their previous two releases, but this adds RnB melodies and synths where there would have been overdriven solos.
Strangely, the title track on here, Bitter Rivals is one of the weaker numbers. It has a strange acoustic guitar intro that is completely out of place, and the chord progression is laughably poor, like something they teach you on your first guitar lesson. However, the power of the chorus and Alexis Krauss’ vocals just kick your ass off (If that’s not a phrase, it is now.) It makes you want to shadow box across your bedroom in a dressing gown (Check out the video at the bottom of the page.) Stand out tracks are the classic Sleigh Bells sound of You Don’t Get Me Twice and Sugarcane, both of which are possible next singles, and both of which sound exactly the same.
This will be hated by rock/metal fans and pop fans alike, but adored by hipsters. If you think you can stomach being labelled as one of this decade’s most disliked subcultures, then it comes highly recommended.
8 distortion pedals out of 10, Out Now, JDF
For more info visit bitterrivals.us