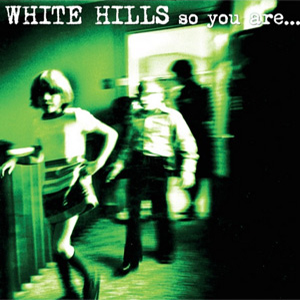 The term ‘space rock’ doesn’t do these two cosmonauts justice. It implies an ethereal aloofness that’s difficult to stomach, but White Hills bring just the opposite – they’ll punch you in the gut while pummelling your precious ears with noise. It’s cosmic, and it’s brutal.
Hailing from the mecca of cool, New York City, White Hills’ eight years on this planet have been defined by balls out rock filtered through what sounds like a warehouse full of synthesisers. This latest release might even be considered an EP (there are only six tracks which break the five minute mark) but the weight of these gems carries. The title track “So You Are…So You’ll Be” sounds as good as anything The Black Angels have produced, and “drum kit” feels like it will fall apart at any moment under the weight of the beat.
Other stand out moments include the chanted vocals on “In Your Room” which stirs memories of that cult meeting you once attended…. It also includes a blistering guitar solo that makes your brain hurt, it’s that good. Be sure to check out the video, which looks like something from The Ring but be prepared to have trouble sleeping afterwards.
Three short, experimental noodling tracks (“InWords”, “OutWords” and “Circulating”), are easily forgettable, although without them the album might be too much to bear in one listen. There is also a lot of what can only be described as ‘knob twisting’ – noise and samples put through synths and filtered until the guitars and drums come in. Not too annoying, but perhaps a little too often..
Currently on tour with The Cult, you can hear those punk influences, especially the fuzzy guitars on “MIST (Winter)”. This is a great addition to the already excellent Thrill Jockey catalogue. Highly recommended if you like your psyche rock with saw tooth waves and flanged Buzzcocks guitars.
7/10. Out Now. JDF
For more info visit whitehillsmusic.tumblr.com
Thrilljockey.com