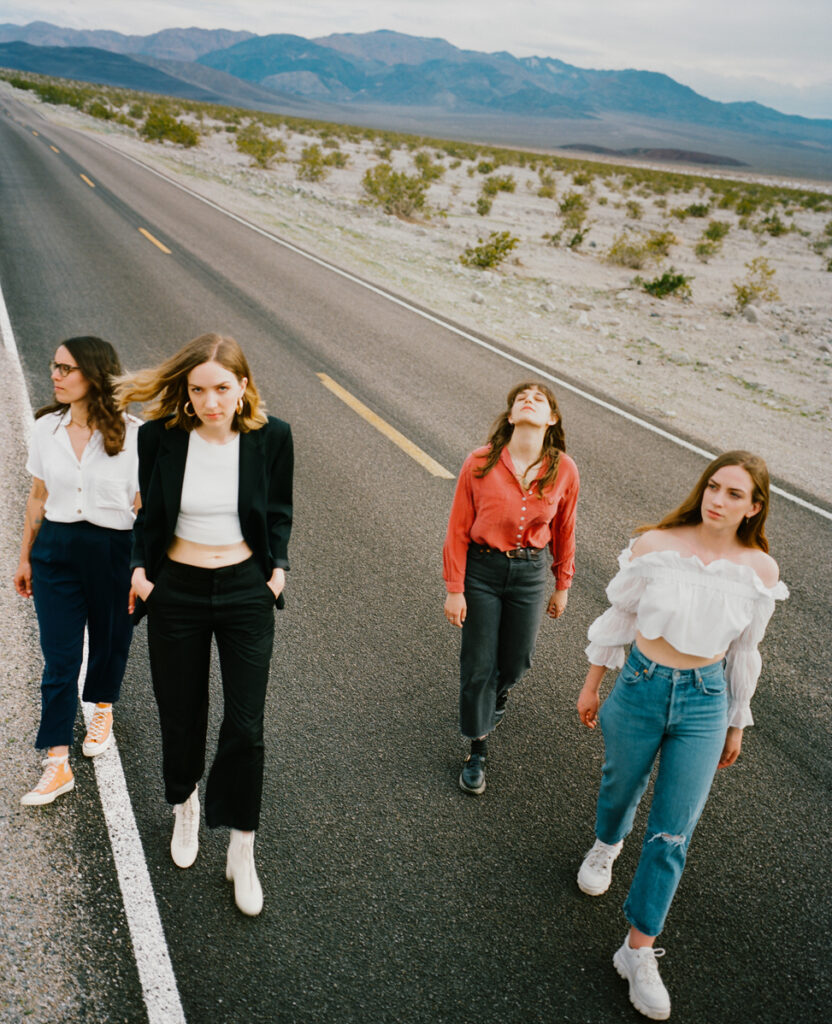 Ushering in summer with their latest single, it’s an uplifting dose of pure pleasure-pop plucked from their second album “Walking Like We Do”. Don’t miss the four Londoners as they take to the road with their most recent work – they might just be responsible for the soundtrack to Summer 2022….

If you haven’t heard their latest new track “Your Light”, which was premiered as Annie Mac’s Hottest Record on Radio 1, press play on the video on the right, turn up the volume & get ready to hear what this summer’s going to sound like!

The perfect track to pull out with the festival season about to kick off, you can imagine this upbeat slice of sunshine setting the beat in the background as swarms of committed sun-seekers and fun-seekers whip out sun-starved limbs and spill out onto summery bar terraces and beer-gardens, fields and forests, the lawns of stately homes – or wherever else our favourite summer festivals take place!

Bringing a new meaning to ‘Sun’s out: guns out’ -summer’s coming and The Big Moon have come out guns blazing to deliver the goods for our summer soundtracks. A shimmering pop nugget, packed with all of the best ingredients of a holiday track!

Intentionally written as a record about freeing yourself, speaking about the track, vocalist and songwriter Juliette Jackson explains:

“I was thinking about how hard it is to tell if things are worse now things are worse now, or if they have always been this way and I just grew up and started paying attention. To me, it feels like we are at this tipping point that is unprecedented – but then it occurred to me that every generation before us probably had a moment when they thought they were going to be the last generation on earth”.

“…then it occurred to me that every generation before us probably had a moment when they thought they were going to be the last generation on earth”.

“This song is about freeing yourself from all of it, just for a moment”, continues Jackson, elaborating on the inspiration behind “Your Light“, the second single from their latest album “Walking Like We Do” and their follow up to “It’s Easy Then”. “It’s a ‘thanks’ to the one person or thing in your life that knows how to come in and open your curtains and light up the darkness and restore your strength so that when you clatter back down into the real world you have the strength to fight your battles, whatever they are.”

Accompanied by a video showing the band riding through the stunning Essex countryside, the record represents a bold, joyous reminder from this pop force to be reckoned with, as they sing in the track, to “remember your light”.

The track’s like a pop grenade they pulled the pin out of and booted across the floor in 2020 – skid-kicking it straight through dreary Covid 2021, ready to land in 2022 for summer – and it’s about to blow up!

The band were originally due to hit the road in 2021, but instead spent lockdown offering ‘one-on-one’ music lessons to fans. Now with the tour set to hit the road finally, following on from support tours with Pixies and Bombay Bicycle Club, plus of course their own run of headline dates in 2020 – they are looking forward to showing off their contagious new music!

Their latest material sees them kiss goodbye to the love songs of their debut album, to try to sort out some more challenging topics – and with the killer combo of Juliette’s lyrics and the brightest music of their career so far; the London four-piece have hit a home run.

Jackson wrote in her lyrics on “A Hundred Ways To Land”, “We don’t know where we’re going (but we’re walking like we do)” – well one thing’s for sure, they’re definitely ‘going places’ – and we can’t wait to follow along and hear what they come up with next!

Follow the band at their website and socials to hear first about tracks and live dates: Thebigmoon.co.uk

Get Tickets To the Brighton Show

Get your tickets for the Brighton show at Concorde2, to hear tracks from the band’s (Mercury shortlisted!) debut “Love In The 4th Dimension”, alongside material from their latest (top 20!) follow-up ‘Walking Like We Do’.

You can buy their latest music from the official website here: www.thebigmoon.co.uk