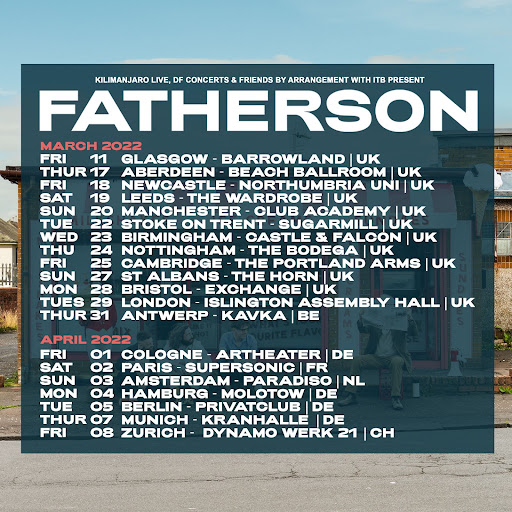 Glaswegian alt-rock three-piece FATHERSON have shared a video of a poignant live session for new song “Honest To God” – which follows the announcement of “Normal Fears” – their first album in a few years, out Feb 25th on Easy Life Records.

A bit of a departure from their usual sound, the album features a more playful, groove-led feel – speaking about the single, lead vocalist and guitarist Leighton says:

“Honest To God is about one of the least confident times in my life, and feeling like a total failure. It’s about that crippling loss of confidence spinning yourself out into a really dark place. Thinking the worst in every situation and not being able to believe in yourself.

I spent a long time trying to redefine what music meant to me and how, if ever, I was going to get the spark back. It took a long time to finish, unpacking everything that it is about really took it out of me.

I wrote the chorus with my friend Joe from Amber Run over zoom and the verses over about 2 months myself. It had to say just enough and no more, I love that about it.

It took a while to distill but as a result it is one of the songs on the album I’m most proud of and one of my favourite songs I’ve ever written.”

Have a look below and look out for news of the UK tour in March, they may not play Brighton but they’ll certainly be up the road in London, so fans won’t miss out!

The band are well known for their captivating live shows – which have seen them tour with the likes of Lewis Capaldi (on his EU arena dates and at Wembley Arena), plus Frightened Rabbit, Biffy Clyro, Idlewild, Augustines, Enter Shikari, Amber Run, Twin Atlantic, and loads more. Now bag tickets to their UK show, info and link to book below: