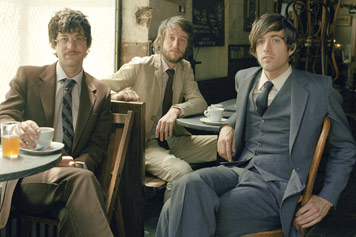 We Are Scientists, Concorde 2
“Yes mate! They’re brilliant!” a friend said enthusiastically when I mentioned I’d be going to see We Are Scientists at Concorde 2 “It’s like half-music, half comedy show” “Oh. Really?” I said, trying my hardest to disguise my contempt, betrayed only by a slight curling of my top lip. When going to see a band I hope the music will take a bigger share of the evening than 50%. To be honest, I’m quite happy with 100%. Drawn out interludes in which band members’ pontificate, makes jokes, or just generally piss-about, have ruined a good few shows I’ve been to see, and never once been an improvement. If a band’s jokes actually improve the evening, what’s wrong with the fans? What’s wrong with the music?
My reservations about the band’s comic approach were not helped by the fact that the first time I met Keith from WAS, three years ago at The Great Escape festival he spent a good twenty minutes trying to persuade me he was the drummer in Vampire Weekend. Trying to interview 30 different bands over the course of a weekend is no picnic anyway, without them impersonating each other.
Scepticism in check, I stood in the Concorde amid a gaggle of surprisingly old people (approximately my age). Support came from the perfectly adequate Tall Ships, who fulfilled the role of support-band absolutely perfectly with their gentle nods to other modern successful bands and drawn-out instrumental passages.
As they drew to a close, the room swelled to breaking point. You could almost feel the promoter grinning over your shoulder, as Chris and Keith emerged to riotous applause.
As their set progressed it became apparent my cynicism had been a little premature. A full-throttle version of “Nobody move, nobody get hurt”, a song I had previously loathed due to the insipid lyrical content, was impossible not to be seduced by, infectiously and aggressively implanting itself in our heads (where it would remain for the next few days) a quick-fire follow-up from “Impatient” and I am pretty much sold, dancing like a loon and singing along in pigeon-teenager.
A two-minute interlude discussion about the novelisation of The Predator films quickly distanced itself from tour-fatigued musos cracking tired one liners, their audience laughing out of a mixture of duty and sycophancy, it was in fact, hilarious. It carried the odour of rehearsal about it, but it didn’t matter. Comedy is an integral part of the performance, serving to provide dancing breaks and endear them further to their fans, as if such a thing were needed. The Weezer school of performance, if you will.
The break is brought to a sudden end by “Rules don’t stop”, but Andy Burrows (previously of Razorlight) misfires on the drums. “A mistake!” Chris Cain announces triumphantly “What do you think of that, it’s our next single!” More Lenny Henry than Lenny Bruce, but in this environment of fast-punchy choruses we’re all friends.
As the evening draws to a close I am unable to find one person who will say anything negative about the gig (despite fairly extensive searching). The audience came here to be entertained and there can be no doubt they got exactly what they came for. I leave smiling and reminding myself in future not to be such a grumpy old bastard.
Dominic VonTrapp
4/5

What Did You Think Of The Gig?
“I hadn’t seen them before, but they were fantastic!” Ru Cook – Producer
“How they are not bigger is beyond me” Tony Marks Juice FM
“I loved the between-songs banter, bloody brilliant” Marie Shelton – Teaching Assistant