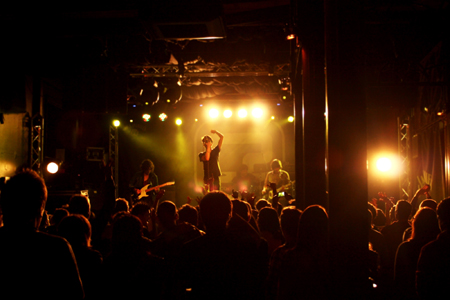 ‘It’s all been done before and it’ll all be done again’ proclaims Funeral Party singer Chad Elliot on East Coast baiting single ‘NYC Moves to the Sound Of LA’.  Oh really? Cowbell rhythms, jagged post-punk guitars, funky disco basslines and high-octane throat-shredding vocals. Are you sure? It all sounds so original…
Yes, Funeral Party’s first offerings did sound a teeny bit 2003, and yes, it’s probably fair to say they may have heard the odd Rapture record. But then, that is getting on for 10 years ago now, and maybe it’s time someone took the original(ish) punk-funk sound of bands like The Rapture, Hot Hot Heat and, to a lesser extent, LCD Soundsystem and worked it into something new.
Funeral Party have received a fair amount of hype off the back of ‘NYC…’ and a handful of well received live shows, and have even supported chart-botherers 30 Seconds to Mars and Enter Shakiri on UK dates. Although whether this serves as a recommendation is pretty debatable.
First signs aren’t overly encouraging. The band begin with more of a whimper than a bang – their opening song dragged into a mire of fuggy guitars, booming drums and fairly non-descript vocals that get lost in the mix all too easily. Even more worryingly, ‘NYC…’ is dropped in next, but suffers a similar fate. The weaving guitar lines, walloped cowbells, and spacey synths that give the track its identity on record are swallowed by an overall sound that favours power over subtlety, and is only saved by the familiarity of its chorus.
Frustratingly, tracks like ‘Where did it all go wrong?’ and ‘Giant’ start with interesting little synth flourishes, or an ornate guitar riff, but soon deteriorate into the same mid-paced stomp-along that characterises the whole set. ‘Car Wars’ is introduced with Chad admonishing us to ‘shake your asses, this is a disco song!’, but it’s hard to see how it differs much from the rest of their offerings.
Only ‘Finale’ succeeds in really showcasing the bands skills, sounding both epic and dancey by virtue of allowing the song to build and individual instruments to breath by themselves. The band also introduce a new song that sounds a lot more promising in that it actually makes proper use of the synth and percussion elements sadly lacking in the rest of the show, and displays some unexpected changes in tempo.
Overall though, Funeral Party have a way to go in transferring the more interesting elements of their sound to a live setting, and it’s not yet clear if they have enough bona-fide tunes to really make a long-lasting impression. However they do a great job of interacting with the crowd, and instil a pretty fanatical devotion in their fans, so they might just get the chance to hone their talents into something that truly excites.
Words by Daniel Pearson.
Photography by Chris Casson.
www.funeralpartymusic.com

‘We’re disappointed Tribes weren’t here but that would’ve been a bonus. It wasn’t that busy unfortunately, but they didn’t care, they just got on with it as if it was packed. They’ve got a lot of energy and they’re really good live.
9/10
Jantine and Michaela

‘It was good, but I expected a bit more. They started off a bit slow, got a bit better and then tailed off again. Maybe we’d go and see them again in a few years when they’ve developed a bit more, but not now.’
5/10
Jessica and Elle

‘It was amazing, really good. I love how close they get to their fans and they look like they’re having a really good time as well. The singer kissed my hand, I’m going to be bragging about that for months!’
11/10