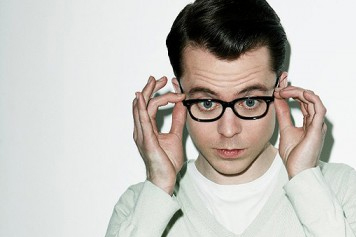 It’s no secret that Tom Vek is somewhat of an enigma. The twenty-something Londoner caused a stir back in 2005 with his debut album ‘We Have Sound’, which earned itself cult status as one of the underground Indie masterpieces of it’s time.
With its ironically blasé vocal style and hooky melodies, the album was hailed unanimously for its originality and production style, and was placed firmly in a bracket alongside Beck’s ‘Odelay’.
Interestingly though, despite recognition and adulation of his talent from the public, Vek disappeared. Expectations for his sophomore L.P were high, but after various rumors and a five-year absence, anticipation changed to disappointment, as many resigned themselves to the fact that Vek was simply gone. Then as if from nowhere, he returned with new follow-up album ‘Leisure Seizure’ and a string on tour dates. Needless to say then, that tonight’s show is an inevitable and complete sell out.
Dry ice begins to bellow from the stage, framing the gangly figure of the man himself. The audience howls with excitement as our hero, backed up by his band, launches into the ever-popular flagship anthem ‘CC, (You Set The Fire In Me)’. From the get-go, the audience is bouncing to the syncopated beat and feeling the rumble of not one but two bass guitars, a relatively rare occurrence in a line-up. But then, Tom Vek is no regular Pop star.
Sporting neatly coiffeured hair and thick black horn-rimmed glasses, he could almost pass for a geeky science lab technician.  His awkward too-cool-to-dance-properly moves are perhaps an extension of the dry wit of his lyrics. He sways lazily to the pulsating beats, never really singing. More like talking loudly in tune. As a cheeky bonus, Vek has installed a number of cameras around the stage to capture the performance from all angles. The footage is then layered and projected in real-time through a screen onstage, adding an exciting artistic element to the performance.
The whole set-up works brilliantly, with his new material picking up right where the last album left off, only with one significant change; the assimilation of Dubstep into the mix. Bass has always been a massive part of Vek’s sound, whether it’s the slapped variety in the minimalist ‘If You Want’, or of the more foundational ilk such as ‘Nothing But Green Lights’, both of which go down an absolute storm this evening.
It makes sense then, that these new half-time Dubstep beats compliment his already established sound perfectly, adding new depth and creating space in the sampled loops. This is most evident on latest single ‘A Chore’, which with it’s catchy lyrical tag-line “What you perceive as life, is no more than a chore”, perhaps hints at Vek’s rumored disillusion with the music industry itself.
Having only spoken a few times to the audience to thank them for the continued support, Tom acknowledges the crowd one last time before sealing the deal with Drum & Bass fueled set-closer A.P.O.L.O.G.Y.
The bass was heavy. The beats hit hard. And Tom Vek is clearly back on form. Lets just hope we don’t have to wait another five years for his return visit.
Words By Jimmy Volts

What did you think of the gig?
Bex, 23. “I loved it! I’m a massive fan of the first album and I think the new one is a real grower.”
Stuart, 30 “He was great, I saw him when he toured the first time round, and he’s still got it.”
Claire, 19 “I can’t believe I’ve just seen him! The new album’s not as good as the first, but I still enjoyed it. ‘I Aint Saying My Goodbyes’ was amazing!”
Guy, 20 “I came on a whim when my mate told me about him. I thought it was cool, but I wish I’d have known more of his tunes so I could get into it more.”