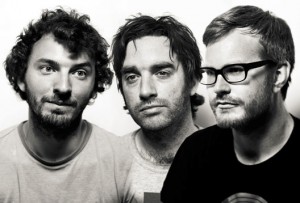 Freebutt, 28 April 2010
The thought of standing in one of Brighton’s most sweltering venues is anything but appealing. But when the band you’re there to see is as talented and challenging as Three Trapped Tigers… well, let’s just say not much convincing is needed.
It is always refreshing to see artists making an effort to push creative boundaries and defy the rules of contemporary music making. Three Trapped Tigers are one such band, and whilst the rest of the music world has been sitting on its laurels, this south London trio have been busy making waves throughout Europe with their exceptional brand of breakbeat synth noise.
The unassuming lads meander onstage with calm, composed demeanours and without batting an eyelid, proceed to blend the audience’s brains to a pulp with a barrage of angular syncopated beats. These are the kind of complex processed instrumentals that we’re used to hearing from production extraordinaires such as Richard D. James and Squarepusher et al. This group, however, pride themselves on creating every sound in real time on real instruments. This means no triggers, samples, backing tracks or production trickery of any kind. It is this precisely this ethos that makes Three Trapped Tigers such a special band and brings their live shows to a whole new level of creativity.
At the heart of their performance is drummer Adam Betts, a phenomenal beat-machine who is completely unbound by any standard percussive traditions. His disregard for typical structure is exceeded only by his absurd amount of talent. Equally impressive is keyboard, synth player and apparent bandleader Tom Rogerson who blends insanely advanced technical ability with laidback piano melodies, rumbling bass lines and even some abstract vocals. The final element in the band’s sound is Matt Calvert whose interspersed guitar-scapes and incessant knob twiddling add texture and depth to the madness.
Naturally though, when a band sets out to create something different, it will inevitably be met with scepticism of some sort. In this case, the sad fact is that this music has been heard before and can be sourced from any number of artists in the Warp Records back catalogue. This is not to say it’s not entertaining, nor does it make their show any less of a spectacle. But unfortunately for a band like this, there is little headroom for artistic progress. And with their third E.P soon to be released (which is well worth a listen by the way) one can’t help but wonder whether they’ve already hit their creative ceiling.

Becks: “Absolutely awesome! I’d been looking forward to this show for ages and the drummer was sick! In fact the whole band were really tight. Wicked, wicked show!”
Dan: “Astonishing! The drummer’s chops were unfathomable, they really leapt out at you. The synth sounds were amazing too. It was like a Nintendo Nightmare!”
Craig: “Simply superb, that’s all I can say about it. Was an amazing gig!”
Words by James Watts
myspace.com/threetrappedtigers