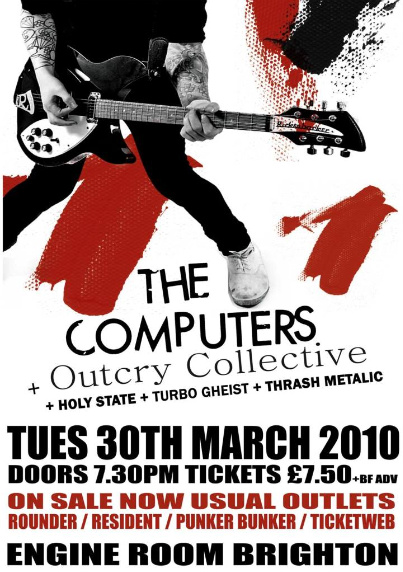 It’s a small miracle that anybody has managed to make it down to tonight’s show, full stop. The howling gale blowing in from the briny deep that engulfs Preston Street renders walking down to the venue all but impossible, the odd Chinese takeaway box or fag packet battering your face as you struggle to maintain a forward motion.
Once inside the warm and cosy environs of The Engine Room, tonight’s crowd are treated to a sound as angry and distressed as the one outside, that of hardcore upstarts Outcry Collective. Fusing together white-hot guitar licks with guttural howls to rival Every Time I Die’s Keith Buckley at his most enraged, the likes of ‘Dead In The Water’ and ‘Straight From The Throat’ stand out as highlights, front man Steve Sitkowski prowling the room like a man possessed. Doing his utmost to get the audience involved (to, unfortunately, little avail), an appropriate sweat is soon worked up and the band leave the stage to warm and deserved applause.
Resembling some sort of post-futuristic Clockwork Orange – minus bowler-hats plus quiffs and tattoos, all decked out in sharp white outfits, The Computers take to the stage as Rocket From The Crypt’s ‘On A Rope’ fades into the background. “Bonsoir”, mutters front man Alex by way of introduction as his droogies plug into amps and punk rock ultra-violence explodes before our eyes. As members of local heroes The Ghost Of A Thousand nod along in approval, the band unleash dose after dose of soul punk mayhem. Not content with taking guitar-playing ventures to the bar, attempting to catch his own phlegm back in his mouth and having a slanging match with friends in the front row, Alex even manages to find time to throw a pristine harmonica solo into ‘Teenage Tourettes Camp’. Aside from the fact the songs are played even faster than on disc in the live setting, tonight’s set represents a near-flawless reproduction of the band’s recorded output. In what seems like an instant though it is all over and we are left to contemplate a rather wind and obstacle-swept walk back home.
Words by Oli Robertson
myspace.com/thecomputersfromexeter
myspace.com/outcrycollective