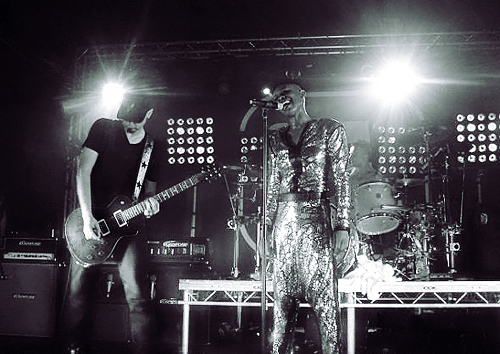 One of the most influential rock bands of the 90s, Skunk Anansie promoted their greatest hits album ‘Smashes and Trashes’ with a warm up gig at Concorde 2 to kick off their European tour.

The band consists of lead singer Skin, bass player Cass, Ace on guitar and Mark Richardson on drums. Originally formed in 1994, the band has been described as ‘Brit rock’,’clit rock’ and more recently by Skin herself ‘in yer face tuneful rock music’. The lead singer is famous for her shaved head, aggressive, political lyrics and a set of vocal chords that range from a powerful scream to a beautiful melody.

The band show they have still got what it takes and are even more awesome live. In fact you would never guess they had been apart. They worked together so well – there is definite chemistry between the members and they looked ecstatic to be back on tour.

Skin, wearing a sequined jumpsuit, must have been hotter than the sun but still managed to jump around the stage constantly and leap into the waiting arms of the crowd. The most iconic and charismatic woman in rock today she was fully engaged with the audience with her trademark wide grin and dirty sexy eyes.

The rest of the band burned with energy and as Ace and Richardson have been teaching at Brighton’s music school BIMM, it seemed they had a personal connection to playing in Brighton. The crowd went crazy when Cass took centre stage to play ‘Twisted’ and there was a surge of people trying to get closer to the talented bass player.

They played new single ‘Because of You’ and the audience were treated to brand new lyrics written just the night before and Skin playing an acoustic guitar. The new material was well received but it was the classics such as ‘Selling Jesus’ and ‘Weak’ that really rocked the mosh pit. This was an up tempo gig from start to finish and the band burned with energy. Included in the encore was the crowd pleasing ‘Hedonsism’ and was a fantastic end to the night.

You can currently download new track ‘Tear the Place Up’ for free on Skunk Anansie’s official website.

10th May 2011
Subscribe
Connect with
Connect with
0 Comments
Inline Feedbacks
View all comments
SEE XYZ IT'S ON! Click for more