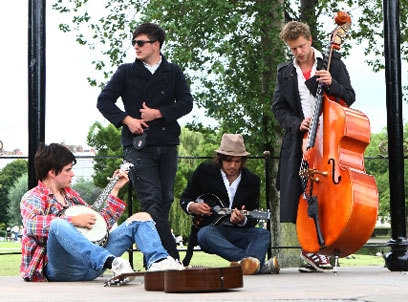 Folk, oh lovely, old-fashioned-yet-somehow-more-appropriate-than-ever folk, it’s the underbelly of everyone’s musical yearning. And tonight, a world away from its origins, Mumford & Sons treat us to hoe-down excellence dealing with love which appears to leave the calm of one’s soul split in two. And in keeping with the folk revival aesthetic, there isn’t a clean shaven face between them as the heartfelt half-beards bust into town as part of their extensive tour.

Quite how Mumford & Sons have arrived so fully formed is anyone’s guess but the fact they have is a treat for everyone. They’re fresh off the back of a celebratory debut album launch barn dance for ‘Sigh No More’ and with instruments dusted down and debris filled noses dutifully blown Marcus Mumford, flanked by his ‘sons’ Winston, Ben and Ted took to the stage and were met with a rapturous Brighton crowd.

Preshow popularity promoted the band to a more substantial setting and this was soon put into effect when they opened with the album’s title track and instantly establish the dramatic contrasts that informed the whole show. Everything was sparse and muted as the hauntingly ethereal four part acapella harmonies cascaded over a few strummed chords, and then the evening exploded into pounding bluegrass glory as Mumford pleaded over the hillbilly cacophony “Love, it will not betray, dismay or enslave you/It will set you free” like a backwards folk ridden Morrissey. The atmosphere really was electric and the crowd quickly became a 200-strong choir when the anthemic lead single ‘Little Lion Man’ was rolled out. With a jaunty beat and fast paced rhythm it takes no time at all for the room to erupt into a thigh slapping hootenanny with everyone encouraged to grab a partner.

Although they are placed within the emerging London folk scene, there is something unique and magical about the four-piece. A band really on the cusp of something deservedly great Mumford & Sons have a knack for playing that most vital of instruments, the heartstrings. But far from a disparaging emotive breakdown, instead, we want to dance, clap and sing, leaving a thousand cheers in our wake. That’s the beauty of Mumford & Sons; they exhaust every consideration of a broken heart and bring it back to life beautifully, especially live.