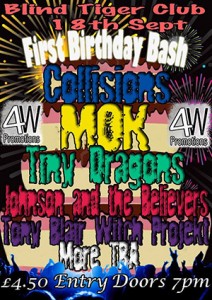 This ever-growing and continually busy promotions and events company has reached its first birthday! Run by an extremely friendly and inspiringly ambitious small group of friends, their ethos is to support local acts as much as it is to reel in the punters.  They may be young but they sure know how to put on a good shindig.
Blind Tiger attendees were greeted with a floor of balloons, a table of cake and party bags stuffed with nostalgia-inducing haribo and party poppers. Clad with not-so-nostalgic shot glasses and glow-sticks, The Tony Blair Witch Projekt come on stage. These four neon Brighton buds blast out a synth-y, thumping and heavily auto-tuned set that Schlomo themselves would aspire to. Judging from their adornments, Cyber Dog had a good day’s sales.
Retinas were then permitted to relax by the extremely jolly and enjoyable Johnson and the Believers. As a heady mix of genres, including ska, indie and reggae, the audience were unsure of whether to two-step, jive or light up a doobie. Nonetheless, everyone found their groovy moves and the band put on an stomping set with howling lyrics and an incredibly respectable cover of “You’re Wondering Now”, a ska and Specials classic.
A trio of Tiny Dragons were on next, making not so tiny noises. Not unlike The XX, and similarly fronted by members not unlike Jessica Stevenson and Simon Pegg of Spaced, they created beautiful, ambient songs, dotted with comedic exchanges to tickle your every emotion.
With the audience more than merry by this point, the stage was adorned with the sexy hip-hop beats of Mok. Fronted by arrestingly cheekboned singers, the raunchy group played hits such as “Sex” in a Professor Green style hybrid genre of hip hop, rap, indie, pop and electro.
Last but certainly not least to take the stage were Collisions, an electric and suitably heavy bunch who rounded off the night with a chaotic jumping mess of humans and sweat. Certainly ones to watch, with their single “Believe in This” reaching number 7 in the Scuzz Top 10 Videos.
With plenty more events on the horizon, be sure to check out Four Walls and experience a night of their hand-picked acts, which they “always aim to make as friendly and personal as possible.”
Audience reactions suggest they’re doing it right:
‘A nice, varied range of genres.’
‘A night where all the bands were first-class and no one sucked.’
‘Everyone had fantastic energy.’
Words by Shira Rossiter