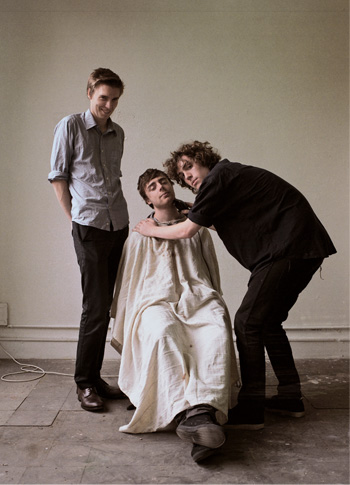 The first gig of the evening sees a capacity crowd pack themselves into the intimate confines of one of Brighton’s newest and hippest hangouts to see a band whose credentials are more than worthy of the setting.
Seekae do for ambient Electronica what Mylo’s Destroy Rock & Roll did for Dance. Their hazy melodies are easy on the ears and their syncopated grooves are liable to cause involuntary gurning (you’ve been warned).
Colourful bursts of melodica blend seamlessly with swelling 8-bit synths whilst the elegantly controlled rhythms roll-on with more groove than your dad’s garage roof.
With the release of their stunning debut album back in 2009, the Australian three-piece are most likely to be lumped into the IDM category (a genre so vaguely titled it’s a wonder how the name’s stuck for so long). But there’s so much more class to this group than that label suggests.
As the lights dim, the unassuming young men couldn’t look more relaxed onstage, and dispel any pomposity with a look of genuine excitement on their faces. They stand casually at their alter-like consoles, thumbing the controls as if searching for that elusive 12” in their favourite record store.
As the sparse beats begin jutting from the speakers, the audience meanders slowly forwards, gazing longingly at the band like campers round a fire. The delicate intricacies and tight angles of the music are balanced perfectly by the groups’ keen ear for melody, even if it does take form through obscure lyric-less samples.
It doesn’t take long though before the award-winning band has the entire venue under their spell, with each member punching buttons on drum machines before switching to play the visceral beats on a real acoustic drum kit. At points, the crowd are so entranced that there’s an awkward silence as each song subsides (followed of course by a rapturous applause).
The great thing about this band is that they wear their influences on their sleeve. Selected Ambient Works, Music Has The Right To Children, Agaetis Byrjun, even; they all here in some form or another. But the key point is that Seekae filter their own creativity through all these inspirational records, to produce some of the most original and hypnotic digital music of the last ten years. And all without falling prey to pretence like so many electronic bands do.
There’s a deep melancholia to the overall vibe this evening that captivates and exorcises with the sweetest form of catharsis.
And as the show draws to a close, the audience look energized, as if having had the best therapy session of their lives.
Seekae’s debut album ‘The Sound Of Trees Falling On People’ is out now on Rice Is Nice.