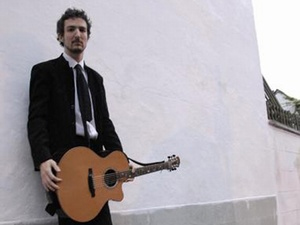 Frank Turner @ The Great Escape Festival, Coalition May 12
With support from Black Lungs
A palpable sense of excitement fills the Brighton sea air as venues begin throwing open their doors and the sound of music and frantic chatter comes spilling out from within: Great Escape 2011 is here. It isn’t long before texts start to filter through from the organisers speaking of packed to capacity venues and all manner of secret guest slots going on. Entering Coalition is easy enough (with plenty of time on one’s hands), yet by the time Black Lungs kick off their raucous set of sweaty punk rock, the room appears fit to burst.
The side project of Alexisonfire’s larger than life guitarist Wade MacNeil, Black Lungs present one of the heavier bands seen on today’s Great Escape roster, yet soon have members of the crowd jumping around with glee. In stark contrast to the semi-acoustic offerings on debut album ‘Send Flowers’, MacNeil and his band pick up the tempo to create a live sound closer to the likes of Anti-Flag or Cancer Bats. Super!
Frank Turner has gone from strength to strength in a very short space of time, spending large portions of road hours on the U.S’ highways supporting the Offspring, Social Distortion and The Gaslight Anthem. He culminated 2010 with a sell-out show at London’s Brixton Academy, so as expected the punters are clamouring for space as he takes to the stage tonight and eases into ‘I Knew Prufrock Before He Got Famous’. Throughout a short yet saccharine sweet set he nods to all corners of his musical collection, with ‘The Real Damage’, ‘Long Live The Queen’ and the rousing set-closer ‘The Road’ getting the whole room shouting words back at him. FT has always represented the epitome of calm and collected up on a stage, yet now (this reporter last saw Frank over a year ago) he appears to have grown into his status with an assured and humble quality that is gladdening to witness.
Words by Oli Robertson