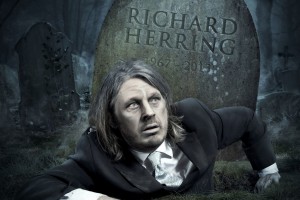 Being kept waiting in the queue outside with the middle class crowd, while the people crammed inside the Studio theatre drank the bar dry, was not the best start to a comedy show (Although I did learn that apparently Miriam’s new house has a wine cellar, but Toby can’t afford to stock it because he lost his job at the bank) But all was soon forgiven when the show began. An ominous voice came out of the darkness, describing the inevitability that we’ll all die one day, and after that sobering thought it was time for some comedy!
The show was dripping with Radio 4 satire and cheeky call-backs. Herring seemed to talk non-stop for a good hour, making this a well thought out, and seamless show. There was an especially withering analysis of 911 and religion (one of his specialties) and a holocaust/train based “Book-a-Zine” routine that was a surreal masterpiece.
There was a classic Herring moment where he pedantically over analysed the children’s song ‘There Was An Old Lady Who Swallowed A Fly’ which had the audience in stitches. It also wouldn’t be a Richard Herring show without mentioning Steven Bennett (from the comedy website Chortle.com) and Herring’s old comedy sidekick, a little known comedian called Stewart Lee.
Having seen every Richard Herring show over the past couple of years, it can safely be said that this was one of his best. Fewer cock jokes (although there were still a few blue moments) and more absurdist ideas. A less experienced comedian may have let the crowd dwell on some of the more sobering observations, but with Herrings pace and charisma, he carried it off. A solid return to form after last year’s disappointing ‘What Is Love Anyway?’ show.
The night ended on a theatrical note. Herring performing Hamlet and delivering the famous “To be, or not to be” monologue. After which the stage went dark, metaphorically ending the show.
If you take one lesson away from this philosophical gig it’s this: take care wanking…
Words by JDF
For more info visit richardherring.com