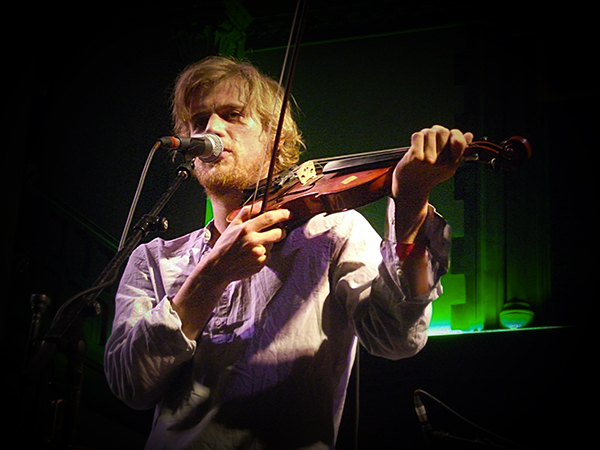 A linen shirted, bearded folk singer and travelling band would never feel out of place in a church on the south coast. The otherworldly surroundings of Saint George’s– complete with unearthly green glow, offered a still backdrop of spiritual silence to Johnny Flynn’s angelically imbued tunes. Tonight the folk artist was joined by full band – David Beauchamp, Adam Beach, Joe Zeitlin, and Johnny’s sister Lillie on harmonium and flute. Supporting artist and band member Cosmo Sheldrake joined the Sussex Wit on keys, vocals and a classical double bass: an instrument dramatic in stage presence in both sound and look, which only added to the theatricality of the set.

The angel haired multi-talented, multi-instrumentalist Flynn was a suitably disarming front man and in an hour set alone showed his skills on the violin, the trumpet, banjo, his own dynamically expressive vocals and the guitar: he swapped between a solid-bodied electric and a particularly attractive, well-loved and battered semi-acoustic resonator.

The band opened earlier than billed with ‘Ghost of O’Donahue’ and raced through a hit-studded set list not wanting to be cut short by time restraints and short change their audience: churches are plainly less flexible than landlords on set timings. The set included most recent single and title track from the latest album ‘Country Mile’ and old favourites such as ‘Barnacle Warship’ and clap-along old-world folk styled number ‘The Wrote and Writ’. All were met by excited cheers from the crowd.

The audience – populated by checked lumberjack shirts and the most impressive collection of grandma-knits ever seen – were stood, necks arched on balconies, seated in rows on chairs and cross-legged on the floor like children at story time. The atmosphere was suitably serene, and, like the tracks themselves, run through with controlled excitement and energy as fitted the surroundings. Half-way through the set an impromptu dance floor was formed to one side of the stage, and during ‘Eyeless,’ the last track of the rousing pretend encore (minus faux-stage departure, to save on time, announced by Flynn as ‘this would be the encore’) Flynn ordered the until now reserved audience to stand up and dance: “We’re at that point now” –  they enthusiastically obliged.

Support Marika Hackman deserves a mention – the solo folk singer-songwriter’s singular plaintive tones rang true with the venerable marbled surroundings. This was the memorable night expected: a stunning and dedicated performance from Flynn and the Sussex Wit, in flawlessly poetic surroundings.

Words and pic by Sarah Rayner