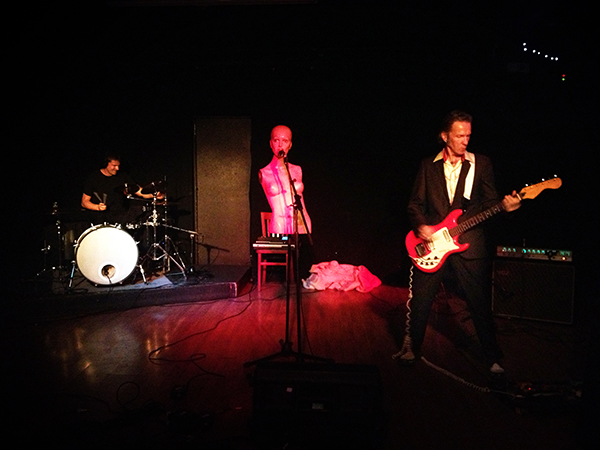 There was definitely something in the air at The Latest Music Bar on Wednesday evening. Maybe it was the juxtaposition of an oldies salsa class upstairs with the raw beats of electro-rock downstairs. Or maybe it was the atmospheric basement setting with its pseudo-cityscape walls and fairy lights. Either way it was a great setting to host the pilot of Overhead Wires Music’s first electro/synth/experimental night.
Kicking off the evening was the captivating Plum. Recently moved down from Scotland, and winner of Best Electronic Act at the Scottish Music Award 2013, she skilfully avoided an awkward five minutes while her laptop restarted by opening with a vocal looping pedal number. After a few more technical difficulties, the rest of her set was an effect heavy affair. Lots of synths, vocal loops, acoustic guitars and excellent use of the Novation Launchpad, which is fast becoming all the rage with electronic artists and DJ’s these days. Her sound recalled Imogen Heap and Frou Frou with her sweet vocals over compressed beats.
Next up was über cool The Pink Diamond Revue (see pic). The lads from Reading always put on a great ‘too cool for school’ show. Using an old Akai 16-track digital recorder to play their samples and backing track, it was a departure from the high tech world of opener Plum. This was a lo-fi masterclass, with old ‘60s guitars playing dark tremolo lines over spoken word and modulated synths. No bass player, no microphones, no singer. Well, saying that, they did reveal an armless mannequin at the start of the set, and with a microphone positioned on her disturbing face, she acted as the front woman for their hypnotic set.
Finally, Phantomz appeared. Hailing all the way from Manchester (Yes, this was a nationwide line-up.) Also using flange heavy backing tracks, but featuring low slung bass lines, big hair and a lead singer who had attitude in bucket loads. Again, without a drummer, but using a camp light up drum stick to destroy a floor tom, Phantomz set out their stall with a trashy yet engaging live performance. It’s just a shame the venue was beginning to clear out by this point as it was a school night, Phantomz would really shine in front of a larger audience.
What was refreshing about the night was the differences in the artists. It might have been in danger of being tedious electronic noodling over ‘experimental’ backing tracks. However, each artist brought their own interpretation of the genre that kept the event interesting. Let’s hope this continues for future nights.
So if you’re looking for something a little different on your Wednesday, instead of heading down Weatherspoons for curry club, head down to Electrobash and prepare to expand your mind instead of your waistline.
8 synths out of 10.
Words and pic by JDF
for more info visit overheadwiresmusic.com
plumtunes.com
facebook.com/thepinkdiamondrevue
twitter.com/thephantomzband