Brighton Centre, 25 May 2010, with support from Sub Focus
Often criticised by drum’n’bass purists as a lesser respectable act due to their commercial success, genre-spanning and accessibility, eclectic Anglo-Australian rock and d’n’b mash up superstars Pendulum have attracted a most diverse crowd this evening. The spectrum of age starts at the late pre-teens and ends at a handful of probably-almost-time-for-a-pension elders (kudos!), and the bands’ appeal across numerous musical subcultures is obvious. There are even entire families in attendance and the large overflowing bin filled with confiscated glow sticks at the Centre’s entrance has little chance of stunting the excitable tension that has so far followed Pendulum on their biggest UK headlining tour to date.
It is up to Surrey-based d’n’b record producer Sub Focus (aka Nick Douwma) then, to maintain this buzz and kick starts his supporting set with well-received irresistible single “Rock It”. The track heavily samples the guitar of Daft Punk’s “Robot Rock” and incites jumping unison and enthusiastic clapping-along from the crowd during the songs’ breakdown. Throughout the set a giant, hypnotic, colour-shifting and essentially, very cool light ring sits centre stage and left to the (eventually tiresome) assisting MC to bark encouragement at the dancing swarm to keep the occasionally slumping energy levels up. Still, the dub smattered, techno inspired and throat-closing bass of audible odyssey “Timewarp” as well as set closer, the upbeat, stomping “Could This Be Real” are impressive enough to ensure Douwma’s short 40 minutes has translated into several more fans.
When Pendulum hit the stage, rows of seats have been abandoned and the standing area is heaving beyond logical reasoning, making it glaringly obvious that many previously seated punters have successfully managed to sneak past the downstairs security. But who wants to be casually sat when confronted with sounds approaching 180BMP and enough strobe to wipe out even the mildest of seizure sufferers? As expected, latest album (“Immersion”) opener “Genesis” starts the set and leads into following new track, the almost seven minute long instrumental assault of “Salt in the Wounds” which evidently leaves the crowd a tad bored/exhausted by its end. Their remix of Prodigy’s “Voodoo People” does manage to restore the enthusiasm though and the band is wise enough to litter their obviously-going-to-be-well-received radio hits (like the chaos provoking “Showdown” and the much loved “Blood Sugar”) throughout their showcase of new material. That’s not to say that Pendulum’s new material is unwelcome; the slower tempo of euro-pop-esque “The Island PT 1” is perhaps the highlight of the set; with its blinding accompanying yellow light show and more bone rattling bass, it really is an impressive sight behold. Latest single “Watercolour” also goes down a treat (with one girl humorously invading the stage before immediately being dragged off by security, smiling and shaking her thang the whole while) and precedes the inevitable encore of “Tarantula” and a notably epic, triumphant rendition of “Hold Your Colour.”
MC Ben “The Verse” Mount has taken note of the varied demographic of those gathered for the headliners tonight and comments that “Pendulum welcomes all… one love, one language!” and whether you’re dancing or moshing, everyone is no doubt united in this experience which – if nothing else – is bloody good fun.

Emma (left) and Claire (right): 10/10 “Both the older and newer Pendulum stuff was absolutely brilliant!” 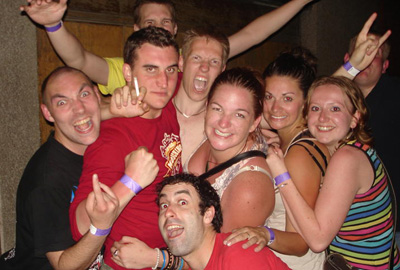 Students from Sussex: 10/10 “Banging as Hell; we danced our nuts and tits off!”
Words and photography by Kat Cole
myspace.com/pendulum