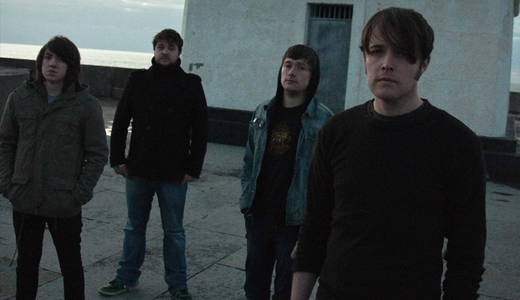 Firstly, it’s up to If Heroes Should Fail to show what they’ve got to offer which in this case is a generally slower, more melodic metalcore vibe. They’ve got the musical chops to engage and keep most present interested, but like so many other young bands of their ilk, you can’t help feel they need to push past the sound of the bands they admire, and create something that is wholly more than the sum of their influences.
It’s obvious very quickly that well over half the people that are now gathered are primarily here to see the next band, Remove, play their first show, and you’ve got to give it to them for mustering such an impressive turnout. They feature the ex-vocalist of Surfaces, whose hardcore punk barks have no problem pushing the decibels up high. The rest of the band might not match his potency, but they show some potential to do what they can do very well.
Up River are a band definitely worth your time. Melodic and tight, they’re fairly new to the Brighton scene, but individually have been playing in bands for well over a year, something that shows in their capable feel for songwriting. The delivery of the fast-paced passion of songs such as “The Last Lights” and other tracks are a testament to the reason they have been gathering momentum, and after booming their way through a powerful version of “Rough Ground”, the audience have been given a reason to walk away duly impressed.
Bastions set about recording their latest EP “Island Living” this time last year (interestingly at Lightship95 – a studio onboard a boat situated in the East London dockyards) and it’s a release that saw them step up their screeching sound to an even higher level. With a new LP on the way too they’ve got newer material to smash their way through this evening, and it’s the newer material that shows just how much they’ve stepped up their game once again.
Their set is scattered with tracks from their other EPs too though, including the ever “Matriarch”, and they close with the bruisingly heavy snarling-dog-of-a-track that is “Dark Father”. These new tracks take their sound to an even darker and demanding place and the small amount of people here get a great treat with a look at what’s to come on their next release.
Words by James Fox
Myspace.com/bstns