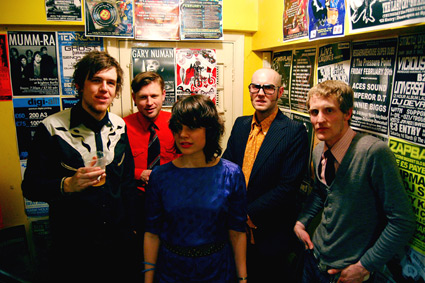 On the hunt for some indie-electro shenanigans, XYZ reporter Jen Blakeley headed down to Hector’s House for the re-launch of Club Kovak.Not having frequented the pub much in the past, Hector’s House is becoming one of the best places to take in a varied and quality range of live music. I arrived at the moderately-filled and deceptively-quiet pub but as the masses steadily arrived I had to fight for space near the stage. I got the distinct feeling that these were people in the know: Hector’s House was definitely the place to be tonight.
Starting later than planned, Eugene Machine took to the stage to kick off electro proceedings. Lead singer Emmagetic looked glamorous and confident as she strutted rhythmically behind her keyboards dressed in a vintage red tiger print dress and red stilettos. The band provided synthetic beats with funky soul, a partnership that really worked.
The crowd now suitably warmed up, Doll and the Kicks dived straight into a much rockier set with lead singer Doll belting out her charismatic vocals, a strange but beautiful cross between Gwen Stefani and Kate Bush. The band combined dance-friendly beats with a rock edge getting the crowd moving and shaking, and the pop infusion in their music shone through in songs such as ‘Roll Up The Red Carpet’ and ‘Everything To Lose’.
Finally, as Kovak took to the stage, excitement rippled through the crowd and the atmosphere buzzed. I had subconsciously become familiar with Kovak throughout the evening as a large screen flashed choreographed images of them. All of their tunes were catchy and bouncy especially the particularly sing-along ‘Rockstar’. The set was considerably longer than the previous acts but seemed to feed the crowd with more enthusiasm, evident in the beaming smiles everywhere. In between sets, the music was as eclectic as the people in attendance, a mash-up of old and new, spanning many music genres. In their wisdom Kovak had asked people to bring their USB sticks with them so they could take a little bit of the night home.
So there you have it: Club Kovak is back with a bang and firmly on the clubbing calendar. If you’re looking for a fun, colourful night with no attitude then look no further.