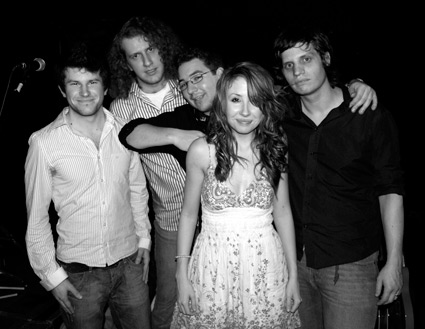 XYZ reporter Jen Blakeley went to her first country music night to see if the Joogleberry Playhouse could disprove her preconceptions of cowboy hats and line dancing…
On 28th February, XYZ pals Kong Promotions showcased the ‘Desperado’ country music night at the Joogleberry in Kemptown. The small and intimate basement setting meant that punters were huddled around small but inviting tables. The crowd was made up from people of varied ages and backgrounds but united by a shared adoration of live music.
First on the bill was singer/songwriter Emily Baker. In the vein of popular female artists such as KT Tunstall, Emily gave a heartfelt performance and her confident style resonated throughout the room. Her songs were genuine and poignant, striking a chord with the crowd.
Next, we were treated to the astounding voice of Emma King and her equally talented backing band The Heartsets. Their set was energetic and enthralling as a barefoot Emma enthusiastically moved around the stage unleashing her powerful and soulful voice. The songs were mainly upbeat in tone with a few slower numbers enabling us to experience the full range of Emma’s amazing voice. Nashville beckons for the five-strong band in July, where I’m sure they will captivate American crowds in equal measure.
Last up, making a brief stop before their trip to Toronto’s ‘Canadian Music Week’ was The Jamestown Union. Fully-equipped with cowboy boots and a banjo, ‘Brighton’s premier country band’ was led by charming, self-deprecating front man Matt Hopwood, who immediately made the audience feel at ease with his in-between song banter. While singing, his English accent was concealed, and authentic-sounding country and western vocals made songs such as ‘Two Miles On’ and ‘Turning It All Around’ beautiful and heartfelt. The songs were emotionally charged and the beautiful male/female harmonies made the songs come alive. A rapturous applause met the end of the set as it had with the previous artists tonight.

The night proceeded until half one in the morning keeping the crowd entertained with country classics. Hopefully this will be the start of a long-running fixture at Joogleberry Playhouse as tonight was clearly a resounding success.