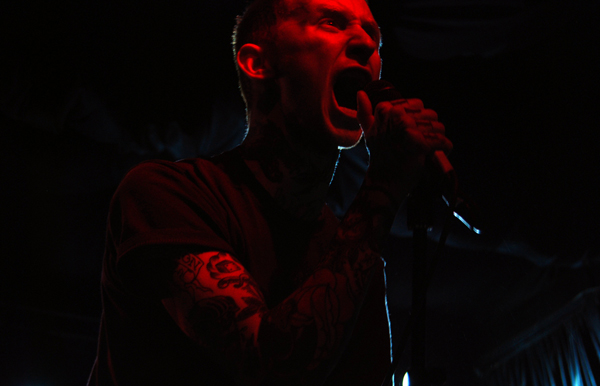 If there was an antithesis of everything that is St. Valentine’s day, Frank Carter of Gallows would be it. Skulking around the sweat-soaked labyrinth of a venue that is the Crypt, the famously confrontational frontman looks like he has more on his mind than saccharine greetings card as he watches main support act, Hertfordshire’s Blackhole, fronted by brother Rich. The devastatingly youthful five-piece waste no time in proving themselves formidable support with their razor-sharp twin guitar attack and frenzied pots-and-pan rhythms. Carter – the younger – bounces around stage with abandon as guitarists Nick Mitchell and Andreas Yiasoumi grind out weighty, testosterone-filled riffs. It’s sublimely powerful stuff and gets the crowd well and truly moving with bodies sent crashing into each other like leaves sent whirling in a storm.
Half an hour later, Gallows take to the miniscule stage, raised off the seething throng of the dancefloor by a mere six inches. Things on this, their most intimate tour for some time, are about to get crazy. Like a well-oiled punk rock machine, Gallows set about bashing out discordant, battering anthems as Frank Carter, hood up and disturbingly manic glint in his eye, tears through the opening few salvos. Aside from a brief reprimand to a punter who misguidedly accuses the band of selling out (“It’s all I ever hear, change the fucking record” is the disarmingly blunt response), Carter seems in an uncharacteristically buoyant mood, even managing the odd face-cracking smile. Well and truly won over, the sell-out audience lap it up, moving with even more vigour than for their outstanding support, loving the aural vitriol being spewed joyously onstage by the five-piece.
Tonight every pounded chord and drum fill is carefully measured out in the most effective and calculated of ways, a far cry from the spontaneous chaos of Gallows shows of old. It shows how far the band have come in just a few years. It has also got to be said that Gallows suit this kind of sweatbox venue far more comfortably than the cavernous venues they have graduated to as a result of the churning gears of the major label machine. They know it too with Carter grabbing the audience’s attention via some teetering lighting rig and barrier clambering, getting right in their faces spitting every catatonic lyric. By the time they whip out a tense, extended version of pit-favourite ‘In the Belly of a Shark’ before ‘Orchestra of Wolves’ it’s all over. There will be no encore. If anyone ever foolishly doubted Gallows sincerity, on the basis of tonight’s performance it is time to repent. The most vital live British punk act since The Clash show no signs of slowing down yet.
Words by Chris Shipman
gallows.co.uk