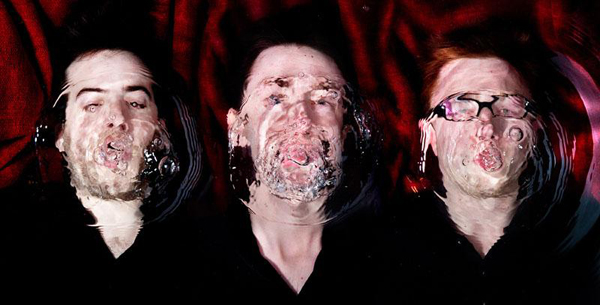 In theory, Delphic should have well and truly missed the boat by now. Having almost made it big as wide screen melodic guitar outfit Snowfight In The City Centre a few years ago, the band have re-grouped and re-invented themselves as a dance-rock hybrid some two years after new rave was foisted onto the world.

In theory, the prospect of yet another act intent on splicing 80’s electronica with 90’s indie is enough to make any jaded music hack want to put their head through the nearest Klaxons picture disc.

In theory, no one should care. It seems a little surprising then, that Delphic should enter 2010 with their star firmly in the ascendancy, yet they seemed to have followed the template for new band stardom down to a tee.

Having appeared on consecutive editions of the highly respected Kitsune Maison compilation towards the end of 2009, they made their first appearance on ‘Later…’ in November, were short listed for the BBC’s Sound Of 2010 award a month later, and released their debut, ‘Acolyte’, to glowing reviews from all corners of the music press at the start of the year.

As a result, tonight’s show at Audio is absolutely rammed, with a crowd eager to see the band in a relatively small setting, and curious to discover if the hype is justified. The band take to the stage backed simply but effectively by strips of coloured neon lights, and launch into ‘Doubt’. Jittery drums intersect with cut-up vocal samples beneath a haze of dreamy synth tones and sweet harmonies, and though the band are extremely tight and confident, their sound is hardly groundbreaking. As the track builds, however, and more and more elements are brought to the fore (a bit of ‘Wicked Game’ style guitar here, some weird panning effect between speakers there), the lights start dropping into deeper and more intense flashes of crimson and violet, and the audience gradually find themselves in the presence of something special.

The band showcase a range of dance sub-genres, shifting from Erasure style pop (‘Submission’) to out and out techno assault (‘This Momentary’) without losing their sense of cohesion or resorting to throwing in incongruous elements of electronica for the sake of novelty. Every track seems to have evolved organically, and even songs like ‘Red Lights’, which starts fairly innocuously and threatens to peter out into gentle ambient dance eventually works itself into a proper pulsating frenzy of euphoric trance at its conclusion. The band finish with an epic working of ‘Counterpoint’, which evolves sublimely from a restrained, emotionally tense slice of New Order style pop, to something akin to Orbital’s 90’s live heyday. The crowd are thunderous in their applause, and baying in their cries for more, but the band, consummate professionals already, leave them hungry.

Mark: 9/10 “That was awesome! I’d heard a couple of tracks before but no real idea what they would be like live, the sound was just immense!”

Jess: 10/10 “I saw them last year at Bestival and they were really really good, so as soon as it was announced we got tickets. So glad I got to see them in a small venue!”

Rich: 9/10 They were wicked. I just got the album the other day and it’s pretty good, but live is even better. They sound a bit like New Order, but newer and with more going on. Plus they’ve got a great light show.”

Jamie: 9/10 “They were really good. I didn’t really know anything about them beforehand but we were all down the front doing proper rave dancing by the end. Brilliant!”