Concorde 2, January 31 2010
The Brighton Tattoo Convention Aftershow Party was held at Concorde 2 and the crowd was entertained by the likes of Urban Voodoo Machine from London who in their own words serve up a large dose of “bourbon soaked gypsy blues.”
The band consists of Paul Ronny Angel hailing from Norway as the devilish front man, backed up by an assortment of musicians on leopard skin covered instruments who rattled the very foundations of the Concorde 2. If you want to get an idea of the bands style take a gander at their website where you can see videos for ‘Orphans Lament’ which was played on the night along with ‘Love Song #666’. It was a mixed reaction from the crowd. There was a definite split between hardcore fans, those warming up to the sound and those who would clearly rather be by the bar with the big swinging doors between them and the band. You can hardly blame them, this is one band you would not want to meet down a dark alley…
Whether you loved or hated it, no one could remain unmoved by the lumps, bumps and hip grinds of Elephant Man Elvis as he joined the band on stage for a rendition of ‘Hound Dog’. The band did not disappoint their fans who demanded more and came out for a double encore consisting of ‘Stole my Dog’ and ‘Real Criminals’.
There was a great atmosphere as the convention was a great talking point and people had all their new or old ink as an ice breaker. It was a great chance to show off and the guys in the crowd seemed pleased to have some ready made chat up lines to use on the girls. There were more than a few people with brand new ink hidden under clingfilm or dressing but there was also a lot of peeping underneath and probably some quite sore tattoos the next day!

What did you think of the Brighton Tattoo Convention 2010? 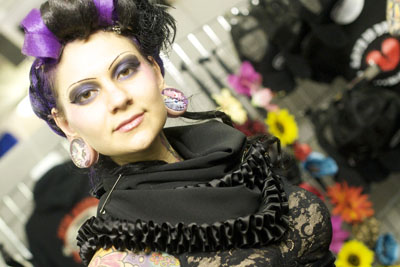 Clarissa, London UK: “It’s not as busy as last year but still worth the trip.” 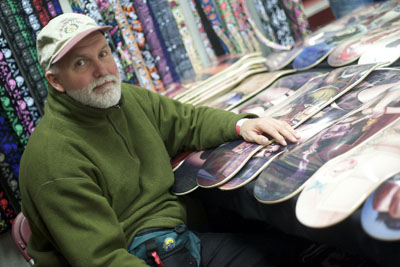 Bob, Vancouver Canada: “Sure you can take my picture but I won’t smile, I come to the convention every year… wanna buy a custom board or belt?” 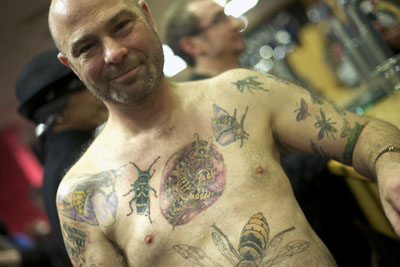 Wasp Man, Horsham UK: “I was hoping someone would ask to take my photograph! Love the convention, it rocks… My favourite tattoo is the one on my breast bone of the wasps eating a plum.” 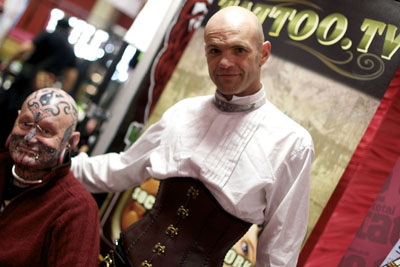 not as busy but better for it i think. james robinsons work really stood out!

Hello
I’m hoping you can help me or point me in the direction of who can. I came to the Brighton Tattoo Convention and got a great tattoo but have LOST the business card of the tattooist (who I need to contact). Do you know where I can get a list of all the tattooists who attended? The tattooist and his wife were Polish and had their shop in Islington, North London. She was about 6′, blonde and wearing a red plastic nurse’s uniform and he had spiked hair! Ring any bells?
Really, really hope you can help!
Judy x

Hiya…
The artist is Stotker Tattoo, his name is Mirek and they will back next year 🙂
thanks to all that came, see ya soon!

This website uses cookies to improve your experience while you navigate through the website. Out of these, the cookies that are categorized as necessary are stored on your browser as they are essential for the working of basic functionalities of the website. We also use third-party cookies that help us analyze and understand how you use this website. These cookies will be stored in your browser only with your consent. You also have the option to opt-out of these cookies. But opting out of some of these cookies may affect your browsing experience.
Necessary Always Enabled
Necessary cookies are absolutely essential for the website to function properly. This category only includes cookies that ensures basic functionalities and security features of the website. These cookies do not store any personal information.
Non-necessary
Any cookies that may not be particularly necessary for the website to function and is used specifically to collect user personal data via analytics, ads, other embedded contents are termed as non-necessary cookies. It is mandatory to procure user consent prior to running these cookies on your website.
SAVE & ACCEPT
3
0
Would love your thoughts, please comment.x
()
x
| Reply