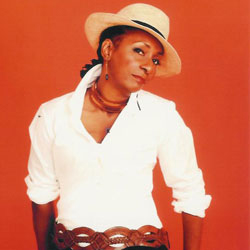 To celebrate Jamaica’s Independence Day, Brighton’s Easy Bar host a free ‘all-dayer’ of musicians and DJs with a line-up which was hard to believe. The Easy Bar isn’t known for gigs and so when it was announced they’d be playing host to Black Twang, Dawn Penn and the Banana Klan it was a pleasant surprise and certainly not to be missed!
The day was marred by bouts of rain, but it was an amazing gig. No one could be disappointed with Roots Manuva’s absence after Banana Klan boomed out across Churchill Square attracting a steady stream of Saturday shoppers. The atmosphere was incredible and the crowd mixed. The Klan knew how to work the crowd and the entire set was a blinder with them perfectly tapping into the slight festival vibe that had taken over those in attendance. Hardly a person there wasn’t dancing, including the bouncers and elderly passer-bys. With the crowd in high spirits now came the time for Jamaican legend Dawn Penn to start. Despite being nearly 60 years old her voice was still as good as ever. You can tell she’s been performing for years because there  wasn’t a note out and just like Banana Klan she kept the crowd entertained. Running through a collection of her singles showed her versatility, especially with her modern r’n’b and dancehall influenced singles of more recent years. Unsurprisingly she finished with “You Don’t Love Me (No, No, No)” to a huge response from the crowd, causing one of the biggest singalongs Churchill Square will have heard in a long time.
By this point the sun had began to shine and there wasn’t a rain cloud in sight. Banana Klan and Dawn Penn set everyone up perfectly for the rest of the day and I’m sure everyone there was hoping for a repeat next Jamaican Independence Day.
Words by Josh Boyd