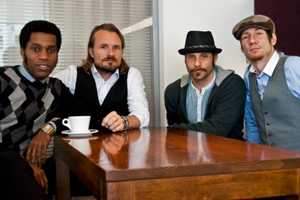 Vintage Trouble are on a mission to bring quality music back to the forefront. Their debut album ‘The Bomb Shelter Sessions’ has topped charts across the globe and the public’s thirst for their energetic mix of Rock & Soul seems unquenchable. XYZ’s Jimmy Volts caught up with frontman Ty Taylor amidst comedy quarrels with their crew to get his take on their continuing rise to fame.

Since their inception in 2010, VT have found a whirlwind of adulation. The Californian four-piece have taken Europe by storm, amassing a reputation for stunning live performances. So how does it feel to have been so readily embraced?
“We see tons of ‘overnight successes’ from a big YouTube video or whatever. But the big hits of 1950s R&B, which I love, were all achieved through hard work on the road. That’s my idea of real success. The fact that we’ve gone from barely filling 200 seat venues to touring with artists like Lenny Kravitz just blows me away.”
Their success on the road shows no sign of waning, and it all stems from an album that was originally intended as just a demo!
“We’d been together a few weeks when we recorded our entire set over three days. Originally we intended to pick a few songs for an E.P, but we were so happy with them all that we decided to challenge ourselves and release an album.”
Taylor’s vocal tone and stage presence are at the heart of this band. He can Rock, he can Roll and he most definitely has Soul. But who influenced him to become the artist he is today?
“Well of course I’ve been influenced by Sam Cooke, Otis Reading, Chuck Berry, Etta James etc. But beyond that, there was the Staple Singers because I grew up in church. You can can’t any better than conveying spirituality through Rock music than Mavis Staples.”
Taylor’s dedication to performance has seen he and his band regaling audiences at some of the best festivals Europe has to offer. So what has been the highlight of their festival season?
“The Secret Garden Party was amazing! I love the beatnik period, where musicians collaborated with artists, dancers and poets. The whole festival was full of that.”
Their seemingly limitless success could be attributed partly to their manager, the legendary Doc McGhee, who’s worked with Motley Crue, Bon Jovi and Kiss to name but a few. So, does he ever work them too hard?
“Not really. I take pride in working with my limitations and to make the next show the best of the tour. You don’t get a lot of chances to do what we’re doing. We’re on a mission together, and we wanna reach as many people as possible in as short a time as possible.”
This month sees the band return to Brighton before jetting off to Japan and Alaska. With such exotic tour locations, could it be true that Vintage Trouble are living the quintessential Rock & Roll dream?
“I just take everyday as it comes. I’m not humble about the amount of work we put in. But that kind of stuff does make my days happier. It’s so real that I have to just stay calm about it… and just do my shit!”
Vintage Trouble will be appearing at Komedia on August 15.
Tickets available from komediabrighton.ticketsolve.com
vintagetrouble.com