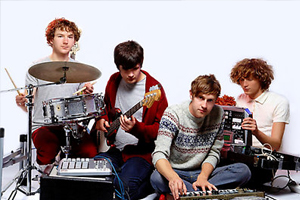 When London-based quartet Post War Years released their self-produced debut album during the ‘Math Rock’ medley of 2009, they succeeded in turning the still relatively fresh genre from a potential flash-in-the-pan into an altogether deeper affair. Jimmy Volts caught up with Guitarist Henry Riggs during a lengthy remix session to survey what lies ahead for them this year.
The Post War Years camp has been suspiciously quiet for a while now, but that’s because the young Leamington Spa-tonians have been busy preparing the the follow-up to their lauded debut. The next album is nearing completion, but will be preceded by two preliminary E.Ps. So what’s their motivation behind this interesting move?
“If we’re entirely honest, the first record was quite a trying experience.” Henry exclaims calmly. “We wrote, recorded and released it ourselves. And despite receiving great reviews, it didn’t reach a wide audience. So we decided to change our method slightly with our next effort. We returned to our day-jobs, wrote as many songs as possible across six months, and decided to get a producer involved who’d take the bull by the horns!”.
The producer that struck a chord with the band was James Rutledge, whose impressive CV (Radiohead, MGMT, Grizzly Bear) speaks for itself. So how was this newly collaborative experience for them?
“It’s been great! We’ve always been happy to take things from a lo-fi angle in the past, but he has this obsession with definition. He’s taught us a lot about crafting a sound and helped us develop a stronger idea of what we want to sound like.
With the first record, we threw every idea we possibly could at it, and probably allowed ourselves to be influenced a little too much by other bands at the time. This time around, we’re sticking to our guns.”
If the two latest singles are anything to go by, then the as-yet untitled second album will surely set Post War Years up for the widespread recognition they truly deserve. They’re also being a little more sparing with their touring schedule for the upcoming ‘Glass House’ E.P, which sees them hit the road for just three shows. One of which is happening right here in Brighton!
“We love Brighton and it’s always fun to come down. We’ve done the whole toilet circuit of the UK before and we just wanna play in the places where we know people will enjoy it and make it a bit more special. We’ve been beavering away in the studio so hopefully there’ll be a few surprises.”
The Glass House E.P is released on July 16 and the band will be performing at The Hope on July 18 and tickets are available from ents24.com.
Words by Jimmy Volts