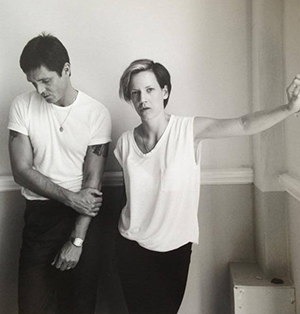 With their single “Control” due out July 28, it’s a busy time for Northern romanticists Jen Bailey and Rick Hornby, aka the TenFiveSixty. It’s late at night and they’re talking from their home mini-studio in London – surrounded by record sleeves, books and flashing lights, XYZ catch up with the band ahead of the release of their new track …
FOR THE AS-YET UNINITIATED LISTENER, WHICH OTHER ACTS WOULD YOU COMPARE YOURSELVES TO, IN ORDER TO BEST DESCRIBE YOUR SOUND?
People have used all sorts of odd references to describe us live and on record, anything from The Au-Pairs and Doves, to the Breakfast Club soundtrack. Certain early 80’s sounds (early Factory, The Cure) always influenced us, and a lot of our writing comes from imagining those early synth duos having two guitars instead of keyboards. But the way we always try to describe our own sound is dark, beautiful, guitar pop music. It’s a melancholic sound full of hope…whatever the word for that would be…’Mope’ maybe. Maybe not.

TELL US ABOUT YOUR FIRST EVER LIVE PERFORMANCE. HOW DID IT COME ABOUT?
Our first gig was at The Bull And Gate in Kentish Town. We actually recorded all the songs before we played live, so our first gig was a bit like stepping out into the dark unknown hoping everything would work and nothing would break down, fall apart, keel over, or snap. We had a moment of clarity during the third song where you could see people were really getting into it, heads were bobbing about at the back, and we knew we had something that was good. Our motto for that first gig was ‘when in doubt, just turn it up’.
AND YOUR BAND NAME?
The name comes from the title track of an E.P. by The Long Ryders, a garage band who were part of the paisley underground movement in America during the mid 1980’s.
WHAT WAS THE FIRST PIECE OF MUSIC YOU EVER BOUGHT?
Jen: The first music I bought was War of the Worlds, it scared me a lot so I played it a lot.
Rick: The first L.P. I ever bought with my own money was a one of those B.B.C. Sound effects albums with about 100 different noise clips on, things like ‘car door slamming’ and ‘dog howling’. I was pretty obsessed with it. No one else was allowed to play it.
YOUR FIRST RELEASE ‘KILLER’S SON’ IS SAID TO SOUND LIKE IT WOULD BE MUCH MORE AT HOME IN THE AMERICAN MID-WEST THAN THE BRITISH NORTHWEST. IT’S A DIFFERENT SOUND TO THAT OF “DO THIS FOR ME” …
I think that was said mainly because the guitar riff is quite swampy, and there’s a bit of slide in there, but that’s kind of it. A lot of other things in the track always sounded quite medieval to us…drum stomp, vocal chant, church bell, it’s all quite plague-ridden really. Also, the smallest thing can effect the sound of a song you are writing at a particular time, so it wasn’t a conscious decision to change the sound for “Do This For Me”, we just turned on the drum machine. It’s just a different song, written in a different time in a different place.
YOU SUPPORTED SUEDE LAST YEAR, TELL US ABOUT THAT…
Being asked to support Suede was a quite pivotal moment for us as it meant an immediate step up to a much bigger venue, and confirmation that our sound is meant for much larger spaces. We don’t necessarily mean volume-wise, but the idea of individual sounds or notes filling a huge room has always fascinated us, and we’ve always written with this in mind.
We played with virtually the same set up we had at the early Bull and Gate show, only to about two thousand more people. And the catering was definitely a step up.
WHERE AND WHEN WAS YOUR LAST GIG?
The last gig was at Matt & Phreds in Manchester earlier this year, since then we’ve been in concentrated writing mode.
YOUR NEW SINGLE “CONTROL” IS OUT AT THE END OF JULY. WHAT CAN YOU TELL US ABOUT THE WRITING PROCESS?
Not much other than it involved quite a few late nights getting all the small parts to lock in with each other, especially the drums. We have a tendency in writing and pre-production to go right round the houses with an idea before coming back to where we originally started from. But it’s whatever it takes really. Moments of pure joy versus moments of continually banging your head against the wall. That’s the process.
BEST ON- STAGE MOMENT SO FAR?
Every gig has great moments on-stage that come and go in a flash but there was a small headlining gig in London where during the first song we both noticed Mike Chapman, the Blondie producer, right at the front, with his eyes closed and his smiling face pressed against the speaker stack nodding along, and those speakers were pretty loud. He stayed like that for the whole gig, then found us afterwards to tell us how much he loved it. Since then have talked to him about working with each other so maybe it will happen. He’s certainly got a good nod…very in-time.
WHAT ARE YOU LISTENING TO AT THE MOMENT? WHAT WOULD WE FIND ON YOUR MUSIC PLAYER?
Muddy Waters, Broken Bells, DumDum Girls, The Police, Polica.
SUMMER’S COMING UP, GOT ANY HOLIDAYS BOOKED? WHERE? (AND WHY?)
One night in Paris later this month. There’s not too much time left over for holidays, so that will have to be one very long Parisian night.
WHAT’S NEXT ON THE AGENDA FOR THE BAND?
We’ll be writing and recording new tracks whilst releasing two singles with two videos over the Summer. There’s also a few shows in the States being planned (New York and Nashville) in October, so we’ll be working towards those and getting the new songs into the live set.
WHEN’S YOUR NEXT GIG IN BRIGHTON?
As soon as possible, once we get some more U.K. dates. Brighton has a character like nowhere else and everyone seems very proud of being there, which is a wonderful thing for any town to have. When we were in Los Angeles a couple of years ago we met a Hispanic gang who had got hold of a copy of Quadrophenia, and since then all they wanted to do was come to Brighton and be mods. They used to go down to Venice beach and pretend it was Brighton seafront. It was all vests, bandanas and tattoos rather than parkas and sta-prest, but they’d have given absolutely anything to be here.
Also, sitting on those beach pebbles looking out to sea does get your melancholy side going. But It’s a good melancholy, full of hope…so there we are again.
Follow the band:
thetenfivesixty.com
twitter.com/TheTenFiveSixty
facebook.com/thetenfivesixty
youtube.com/user/thetenfivesixty
soundcloud.com/tenfivesixty