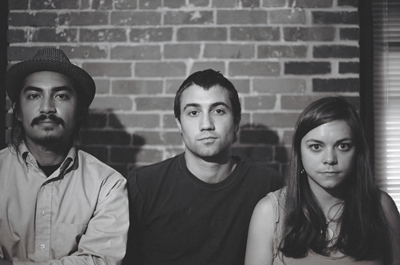 The Low Anthem, a trio of musicians from Rhode Island, have released one of the year’s finest albums with “Oh My God, Charlie Darwin”. Fusing folk, blues and rock’n’roll with instrument-swapping virtuosity, this is a band to cherish. Joe Owen asked the band some questions about music – and trains.

The new album feels like a big step forward and has a real variety of sound and tempo, how did the falsetto and the real stomping rock’n’roll songs come about?
Ben: The rock’n’roll thing took form well before the recording process. A bluesman named Dan Lefkowitz had been a member of the band and brought with him a raw sound which stuck after he left.  Along with other influences including Tom Waits, the raw sound of Dan’s vocals and guitar/banjo playing sparked something in the band that you eventually hear on “Home I’ll Never Be” and whatnot. The falsetto drifted into the mix during a long failed night of recording Charlie Darwin. After about 100 takes, I found myself lying on my back drunk on the floor playing the guitar and squealing the song an octave higher. We were transported…went with it.

Does the sudden attention the band is getting prove that hard work still pays off in the music industry above hype?
Ben: We don’t know. There’s crazy hype-shepherds out there. We don’t completely understand how it works…

Reading your biographies, you are very multi-talented people. Was music a first love for all of you?
Jocie: Music has always been part of our lives but we also do other things.  Jeff, for example. He’s a tweed wearing, uppity historian – especially of baseball and US history. His last undertaking was researching the “genealogy” of his moustache. He also started a book club and spends most of his nights watching Richard Dawkins speeches on YouTube. Ben likes to curse and snort about local politics. He also likes art and jokes. Music was always my first love but I’ve also done arts in interactive space as well as physics.

Seeing you play live is a staggering display of musical diversity with you all swapping instruments. Is it as thrilling to play as it is to watch?
Jocie: Well thanks, it keeps the music fresh for us. Bringing a new arrangement to a song allows us to nurture our relationships with the songs, lest they go stale. Sometimes there is a sonic hole in an arrangement. Sometimes that hole begs to be filled with a sound we can’t find in the rehearsal room. That’s how new instruments are brought into the travelling circus.

There’s a timeless element to the music. It almost seems like you’re channelling the ghosts of some depression-era travelling musicians. Are you big lovers of America’s musical and literary heritage?
Ben: Some of us read…more than most shitty bands, less than many good ones.

Who are your heroes, musically and otherwise?
Jocie: John Steinbeck, Bob Dylan, Woody Guthrie, Tom Waits, and Neil Young, to name a few. There are also a number of female artists who have greatly influenced me, including Gillian Welch, Sylvia Plath, Janis Joplin, Joni Mitchell, Julie Vaverka (clarinetist), Marjorie Marrymen (classical composer). Other classical composers that have influenced me include Gustav Mahler, Maurice Ravel, and Arvo Pärt.

How does a band with so many diverse elements end up playing folk, and how much do the classical and jazz influences play out within your music?
Jocie: Our backgrounds force us to have an ongoing artistic battle. We are playing song-based music and are drawing mainly from the folk tradition, but our arrangements are able to grow in funny, unpredictable ways.

Jocie, were you really a Nasa technician? If so, can you answer this question for us please:  If a 60 metre long train travelling at 60 mph enters a one mile long tunnel, how long will it take the train to clear the tunnel?
Jocie: Haha…I suppose I will humour you. There are about 3.28 feet in a meter so the train is about 200 feet long. There are 5280 feet to the mile so the train is roughly 1/26th of a mile long. If it’s going 60mph, then multiply the length of the train in miles by 60 to get the extra time it takes for the train to travel the distance of its length in seconds: 60/26 or about 2.3 seconds. With the added on minute it takes the train to travel the mile through the tunnel, for the train to clear the tunnel it will take about one minute 2.3 seconds. I bet you never thought you’d really like to know the answer to that question. I did actually study physics, and I did actually work for NASA briefly on a super heterodyne infrared spectrometer analysing the photochemistry of Titan’s atmosphere. Want to know about the work I did at UC Berkeley on time synchronization of wireless sensors? Oh boy…

“Oh My God Charlie Darwin” is out now.
The Low Anthem play End of the Road Festival in September.
lowanthem.com