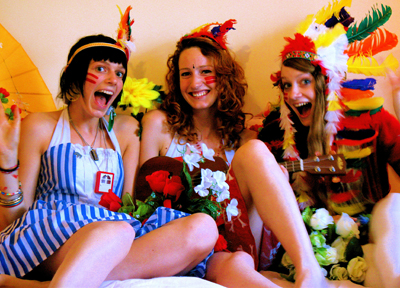 Andrea Fox talks to the busk-loving, ukulele-playing, giggling Brighton trio, the Half Sisters, about dancing skeletons, tweeness and the perils of youth.

First things first – are you really related?
Fifi: Well, Freya and Isadora are sisters…
Freya-Rose: And Fifi should be our half sister so…we named the band after her!

You played Loop Festival and you really made it your own – with your own stage…
Isadora: We love having fun and we want to share that.
Fifi: We had loads of activities all day like face painting, which went down really well.  I think about 90% of Loop was covered in yellow and blue paint.

And you were selling dancing skeleton earrings, which link in to one of your songs?
Isadora: Yeah, our song Dancing Skeletons is about the idea of caring for someone and wanting to be with them but you can’t, but when you die your skeletons can be.

That’s so morbid, but so sweet!
I:  We once did a show and this guy had a skeleton costume on and as we were singing we acted out all the words, then died and fell to the floor at the end, it was so funny.

So Half Sisters, do you fight?
I: Ha ha, Freya-Rose threw a telly at me once.
FR: And I shut your head in the sunroof.
F: Oh yeah, that’s a good one!I: We don’t have fights we like to call them heated debates!

You also do a lot of alfresco performing…
FR: We started our band like that, we were bored of seeing normal shows and we wanted something to watch. We were bored one summer and wanted to make some money. So that’s where our entourage of face paints and stuff started.
F: We were thinking – how can we make people notice us?  Right let’s just get some face paint on.
I: In our songs there’s a lot of jumping around and…(all together) ONE, TWO, THREE! WOO!

You’re brilliantly twee, but do you mind that label?
I: No! The most important thing for us is we’re sisters, so there is no point in trying to stand on stage and try and be someone cool, it’s like being on stage with your mum in your pyjamas
F: It’s all completely honest.
I: And even if one of us doesn’t feel comfortable singing a note or playing a particular part we won’t do it, it’s all about fun.

As a band who do you guys admire?
FR: The Spice Girls!!
I: Ha, definitely. We also listen to a lot of Japanese and African music. I don’t think a lot of people realise but things like the ukulele riffs are influenced from that.
F: But the attitude is Spice Girls all the way.

Watch them play and possibly get your face painted at Beachdown Festival on August Bank Holiday.
thehalfsisters.com