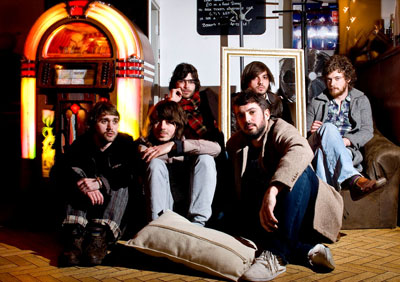 Sometimes bands come along and make you remember why you love music. Goldheart Assembly are one of those bands, with their stunningly beautiful pop songs and penchant for recording in interesting spaces. Joe Owen spoke to the harmony loving charmers about man-bags, squirrels and unusual recording methods.

Goldheart Assembly are a dashing looking band, all beards, hair and vintage chic. A look which shares a certain timeless appeal with their music, but didn’t go down quite as well at a recent gig in Hartlepool. Singer Jim Dale takes up the story: “We walked into a pub before the gig and as we walked in three guys at the bar said “They ain’t coming in here,” and then someone said, “Nice man-bag” as I walked in. Singer-guitarist John Herbert interjects: “So we took them all out….” Jim laughs. “Yeah, and after that we had a lot of respect in Hartlepool and that night they just all piled into the gig, hundreds of them…” John laughs, “And we sorted all them out as well….”

The band’s back story is clouded in mischievous mystery. Some believe they met at Whipsnade Zoo, others that they bonded over a shared love of fish. Tall tales aside, the band actually evolved gradually, with the core vocal talents of John and Jim at the group’s foundation. Jim recalls, “We formed a band and Dom (guitarist and scarf lover) joined and completed us in a way and since then we’ve been recruiting…me and John have been playing for two years, Dom’s been with us about a year and this line up’s only been together for two months really. It’s an Assembly so we recruit as we go along. But we keep firing! We’re terrible for firing…the tour manager’s going next – he’s going to be sacked straight away!” 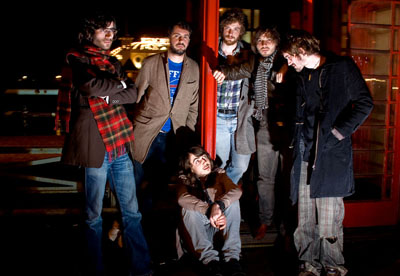 Anyone reading about the band can’t help but have noticed the comparisons with a certain American band involving foxes who also like harmonies and beards. “Don’t say it!” warns guitarist Dominic. “I think it’s just lazy journalism”, agrees Jim, “it just comes from the fact that we don’t mind everyone singing. We’ll get anyone up to sing.” John continues, “Yeah, we’re going to get the tour manager up to sing…” Jim adds, “I think they’re the only other band who have four part (harmonies)…but we have better harmonies, theirs are very lazy block harmonies and ours are very complicated out of tune ones!”
The band also like to record in a steam engine museum – one of those touches that gives the music such an ageless and loving feel – where the group are working on new material for their mini-album release through Fierce Panda. “We’ve tons of new material and we’re eager to get it out there,” says John. “Ideally any recording will be done in the steam engine museum, it’ll be great to get back in there as there’s a couple of new Victorian engines that we’d love to try out as backing tracks to some new songs. When using two engines simultaneously it’s difficult to get the tempos to match so we have to play with the throttles to match the piston speeds. Once you’ve matched them you have yourself a fantastic backing track!”
The band has had a feverish few months, with their double A-side debut, “So Long St Christopher/Oh Really” being released, while finding time to deliver a string of superb festival performances at Isle of Wight, the V Festival, Glastonbury and Reading. With their soaring melodies and rich sound, their sense of humour and their delicious harmonies, this is a band set to carry on getting bigger and better.
Goldheart Assembly tour with the Low Anthem in September
“So Long St Christopher/Oh Really” is out now
The band’s debut album is scheduled for an October release.
Photography by Ruby Allcock
goldheartassembly.com 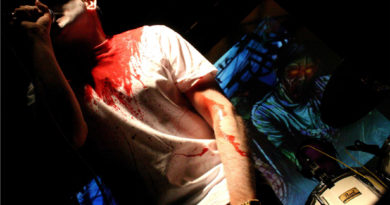 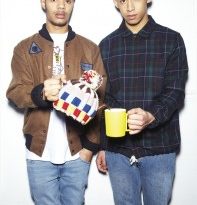 Interview: Rizzle Kicks back in Brighton! 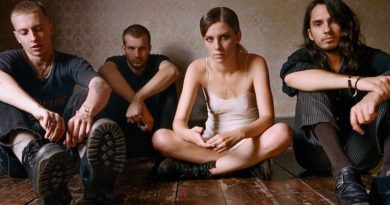 INTERVIEW: Wolf Alice on their UK tour and new album!