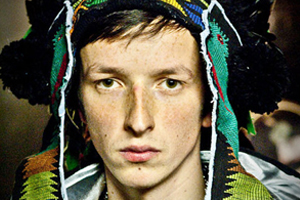 
The son of an Oxford music professor, Orlando Higginbottom, as a child, has already toured extensively as a classical singer. Now at the ripe old age of 24 he’s at it again, this time however he’s doing it with his own Electro House(ish) tunes…oh yeah, and dressed as a dinosaur. Maison caught up with him fresh from Bestival and ahead of his UK tour…

Happy or sad that Bestival marks your last festival of the season?
I love summer and I’m already looking forward to next year but the practically of festivals is so difficult. I can’t wait to have a venue to myself to be able to get the soundcheck and production right. There are certain things you cant predict at festivals; I’ve had gear break just as I’m going on or I’ve not been able to take an engineer and have had some wally on the lighting rig fucking everything up. Lots more good experiences than bad though thankfully.


So now that you’re touring as an adult I take it there’s a lot more partying this time?
Its mainly hotels and airports but the show is always the most important bit and I’m not just saying that. It is usually the most fun bit anyway so that’s the focus. Sometimes we’ll go out afterwards but touring is pretty hectic. We’re just trying to put on a really good show while having fun during the performance, I wont sacrifice that for going to see some local monuments or getting pissed.


You’ve mentioned your lighting setup what other musical toys do you take on tour?
It depends on what show I’m doing. If I’m flying somewhere then I’ll definitely strip it down. For the UK tour there will be quite a lot of synths and drumpads, some of it’s essential and sometimes I wont play a certain instrument then on other nights that might be my main toy. The more gear I give myself up there, the more different each show can sound. I just have more options but usually I’ll get tickled by one particular idea during a show.


The last of couple of years you’ve toured the EPs a lot but your debut album only came out in June, have you noticed a difference in the shows since then?
Yeah there’s been a lot more interest and a bigger variety in the crowd I play to. I’ll find out more on this tour I guess, the last time I toured was in February so now hopefully people have had and listened to the album so we’ll see if they’re singing along to every track or not.


A lot of the tracks were written well over a year ago, do you find it odd seeing peoples enthusiasm for tracks that, to you, are old?
That’s actually really important to me because if everyone gets bored of it then I’m going to get bored of it. However when I see that people are still reacting to an older track then it keeps it fresh and exciting for me. I’m always really happy when I go somewhere new and I see a track that’s I’ve performed a lot go down well, that means a lot for me.


‘Trouble’ is your first release on a major label, what effect has that had in comparison to the previous EPs?
It’s really opened up the potential sides of my audience, I became aware that this project could become a lot bigger and I should respond to that. There’s also a very simple side, when you write music and imagine playing it to 300 people it’s very different to writing and imagining playing it to 4000 festival goers. After this summer and this tour I think my sound will change because of that. Sonically things have to be different and what you’re aiming at also changes.


Your album manages to be emotive where a lot of dance music fails, is that something you intentionally set out to achieve or do you just have a knack for it?
It was just the music I wanted to write. That’s one thing people do say, that the album sounds quite melancholy. I agree a lot of dance music lacks another level, a lot of it is quite straightforward but often that is the good thing about it. But yeah I wanted to put something across that had stories and feelings behind it. Pop songs basically, but coming form a dance background and that’s how it turned out. I don’t think it’s going to go away and my music will always be a bit like that.

Words by Chris Leggett
‘Trouble’ is out now on Polydor.