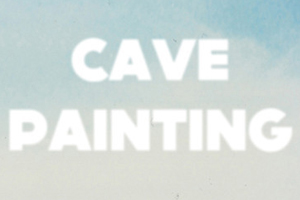 Their songs are joyously grandeur affairs and the accompanying video’s are artfully crafted stunners. Now, having formed from the ashes of various other groups a mere two years ago, Brighton’s own Cave Painting have reached that major milestone; the release of their debut album. XYZ caught up with frontman Adam Kane to see what it’s taken to reach this point.

When we first catch up with Adam he’s still fresh from a performance upon the roof of London’s Soundcloud H.Q in preparation for the release of the debut record ‘Votive Life’. So how does it feel to released their ‘baby’ into the ether?
“It’s really good! We’re excited and anxious about how it will be received but in a way it doesn’t really matter, because we’re happy with what we’ve done.
We’ve had it ready for a year or so now, so it’s good people are finally gonna get to hear it.”
Their keen eye for detail makes them one of the city’s brightest young bands, and so far it seems they’ve yet to put a foot wrong. Perhaps this explains why they decided not to release the album until the time was right.
“The thing is, you never know if you’re doing things right or wrong. I think we mainly just wanted to build the profile a bit more before putting it out. It’s been frustrating but it’s also been good to sit and consider it.”
On the subject of opportune moments, the band were recently invited to support local Rock & Roll legend Gaz Coombes on tour this month, meaning they had to reschedule their tour somewhat. So, how does it feel to support such a well known figure?
“I find it really strange, because I was listening to Supergrass when I was about seven. They always had tunes on the football, so it’s kinda funny. I’m quite intrigued to meet him, see what he’s like. I’m sure he’s a right laugh to tour with.”
So do Adam and the boys enjoy being on the road?
“I’d rather not do anything else. Me and our bass player Rich hate being at home. Because you don’t know what to do with yourself when you get back, apart from pay the bills.
Playing live is probably the best part of being in a band (well it is for us) so it makes sense to wanna be out there playing. If I had a choice, I’d be on tour.
Cave Painting’s debut album ‘Votive Life’ is out now, and you can catch them at The Green Door Store on October 9 for the official launch show.
cavepaintingmusic.com