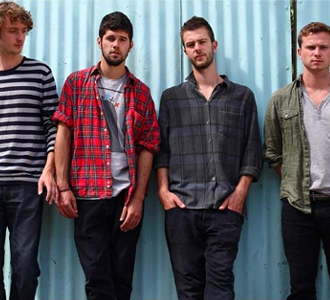 Initially a quartet, the wafting strains of their uber-cool instrumental, jazz-influenced ambient music have developed into something special, with a poppier, more electro direction. They formed back whilst their original members were studying ethnomusicology at the School of Oriental & African Studies. Years on, Portico (now a three-piece) are out on the road promoting the release of second album “Living Fields”  (out April 6 on Ninja Tune). XYZ Magazine caught up with  Jack Wyllie from the band for a chat about what’s been happening behind the scenes …
Known for their exceptional talent in the field of music with a jazz / folk influence, London band Portico started out as a Portico Quartet; Jack Wyllie (soprano / tenor saxophone), Duncan Bellamy (drums), Milo Fitzpatrick (double bass) and Nick Mulvey, who took his own road in early 2011 to pursue a career as a singer-songwriter. Replaced by Keir Vine, (hang and percussion), Vine moved on in August last year, prompting the band to drop the ‘quartet’ and assume their current noma ‘Portico’ – originally adopted following an incident in Italy where they were rained off and had to take cover under a portico whilst they continued their performance.
Debut album “Knee-Deep in the North Sea”, released as Portico Quartet, was nominated for the 2008 Mercury Music Prize, and was selected by Time Out as their best jazz album of 2007. Three albums later (following sophomore LP “Isla” and their self-titled third effort), with the release of “Living Fields”, the band show they’ve got even more to bring to the table. Featuring vocals from Jono McCleery, Jamie Woon, and Joe Newman of alt-J, the new album unfolds a more developed and mature side to their sound. We caught up with Jack in London, whilst he tried to fix his  broken phone …
“My (iphone 4) has stopped working!” he laughs. “I’ve spent the last 40 minutes trying to sort it out!”  “You know when you have to get  the puk number etc” As Jack strolls  the streets of East London, we’re  keen to find out more about the  album; written in about 8 months  and longer in the planning, how  does it feel to finally have it done  and on the way out, and what can  Jack tell us about the upcoming  tour to promote it?
“It feels really satisfying!” Jack reflects. ”We can crack on with some new stuff now – and the tour coming up to promote it. A lot of the new material was made on the computer and collaged together afterwards.” Jack explains, as we talk about how they plan to translate the album to the stage during their live shows. “On the tour we’ll be joined by Jono Mcleery, who appears on 5 tracks – and there’ll be a lot happening that’s exclusively for the live show. There’ll be a lot of improv, it’ll be freer and looser, and we’ll go to places that we don’t go to on the album, it’s going to be different every night! It won’t be deliberate or precise” he continues; “more of a flow …”
It sounds like they’ve got some nice surprises up their sleeves for gig-goers on the tour. With so much improv, how will they manage to make sure it gels 100% of the time the way they want it to, we wonder?
“Well we know how each other work now, we know what the others will do – with a jazz background, improv is such an integral part of it, and we’ve been playing together for 8 years”. Does anyone ever get carried away with their own agenda? Laughs “No! It stays more of group thing” (more laughs)
And for those who’ve yet to hear their music, how would they describe it?
“I’d say it was somewhere between ‘disintegrating ambience’ and ‘structured pop’ – experimental ambient, electro – that’s become a bit more like structured, vocally-driven pop.”
Out on tour as threesome Portico, plus guests, the band have previously been used to playing as a quartet … “Yes, this time it’s going to be different, we’ll be far less jazzy, with more monophone guitar and bass, electric drums, and more  synth stuff…”
We’ll look forward to it! So what’s their stand-out, on-stage moment from last year?
“Well we barely did any gigs last year as we were busy writing the album, but I’d say the Gilles Peterson Festival. It was in the South of France, in an old amphitheatre that was built into a cliff – the venue was about a thousand capacity, and as we played, the sun was setting behind us!”
A stunning setting for stunning music, from a band garnering fans across the country as they complete their UK tour.
Portico’s album “Living Fields” is out April 6 on Ninja Tune.
See porticomusic.co.uk for live dates and to buy tickets.